It Could Happen To You Blu-ray Review 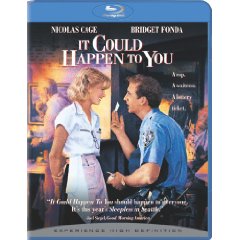 Inspired by an actual incident, this unassuming, wonderfully good-natured romantic comedy tells the story of a New York City street cop named Charlie (Nicolas Cage) who makes a promise to a coffee-shop waitress named Yvonne (Bridget Fonda) that will change both their lives. One day after coffee, Charlie is embarrassed to discover he doesn’t have money for a tip, so he tells Yvonne that he’ll share half of his winnings if the lottery ticket he’s holding comes up a winner. Sure enough, he wins the jackpot–a whopping $4 million payoff–and Charlie’s wife, Muriel (Rosie Perez), goes ballistic when he tells her about his deal with Yvonne. From this point, It Could Happen to You follows Charlie’s dilemma as he is forced to decide the proper course of action, and director Andrew Bergman smoothly incorporates a gentle love story into this amusing crisis of conscience. Fonda and Cage have an easygoing chemistry that adds a pleasant touch to the movie’s fairy-tale plot, and the story’s kindhearted sentiment is never so thick that it becomes sticky-sweet or artificial. As feel-good comedies go, this one’s a class act.

The plot is a fairy tale with the real intentions are precisely where it counts. A marriage in disgrace due both of them would seem to talk by different TV channels. His marriage is far to be a dialogue, but an exchange of monologues. A honest man, a good guy, a candid man, is a cop in NYC, an ambitious wife; a disillusioned woman plenty of good feelings who suddenly will meet one each other in this little picture of low budget perhaps, but loaded of spring vision. There will be a gradual, very emotive and absolutely expected love affair between these solitaire souls, that will experience certainly new, varied, encountered and cruel emotions.

Bridget Fonda is engaging as an actress. She possesses that delirious touch just reserved to a few artists. She illuminates the screen with her mesmerizing sidereal beauty ornamented with her naïve smile; she is a lovely and very talented artist who stole the show along the picture. Rosie Perez is fine as the ambitious wife and the great Seymour Cassel as the elegant Jack Gross is terrific. Nicholas Cage in one of his best performances ever; very natural and credible in that character The script has no fissures, the frame is the always changing City of the World and the fit camera of Andrew Bergman, will allow to reconcile us with the life through this unusual film, without special effects, free of violence, chase cars and sensationalist explosions. I swear it.
Movie Content: 8/10

The print is presented in 1080p/AVC MPEG-4 with a 1.85:1 aspect ratio. he print looks good on Blu-ray having seen this film plenty of times on DVD and television over the years. Colors look saturated holding a consistent array of colors throughout the film. Blacks are deep providing some very good details. Intentional grain is also consistent throughout the print.
Print Quality: 8/10

The audio is presented in Dolby TrueHD 5.1 mix. This film is primarily a dialogue driven film. Definitely more front channel speaker usage and rarely usage of the rear speakers. Dialogue is clear through the center channel with no apparent issues.
Audio Quality: 8/10

In a way this movie is a bit of a guilty pleasure, because it does have a fair amount of predictability. Both Bridget Fonda and Nicholas Cage turn in some excellent performances. Fans of the film I highly recommend picking this up on Blu-ray due to the upgrade in video, but the issue here is that the film has no special features.
Overall Rating: 8/10