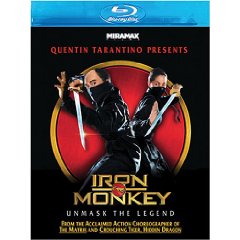 Yuen Woo-ping’s dazzling take on Robin Hood, set in a 19th-century Canton township, stars Yu Rong-guang as the humble healer Dr. Yang, who dons black tights and a bandit mask for nightly excursions as the Iron Monkey to rob from the thieving governor of Canton and give to the poor. When wandering herbalist and martial artist Wong Kei-ying (Donnie Yen) enters town with his son in tow, the governor blackmails Wong into capturing the outlaw. Needless to say, Wong and Yang become fast friends and team up to take on the new villain in town, the Monk, and his mob of street-fighting thugs. The story is pure pulp, a turn-of-the-century superhero picture with a comic book sensibility, and master choreographer Yuen (Wing Chun) provides plenty of splashy, stylish battles with an emphasis on elaborate wire work and complicated stunts–notably the spectacular finale in a fiery inferno as the heroes leap above the flames, balanced on burning poles. Fans of the Once Upon a Time in China series (created by Iron Monkey producer Tsui Hark, Hong Kong’s answer to Steven Spielberg) will appreciate the prequel elements featuring Wong’s son (played, incidentally, by a very gifted young girl), a scrappy little customer who turns out to be none other than future folk hero Wong Fei-hung.

Yuen Wo Ping, the fight choreographer for CTHD, struts his stuff creating the martial-arts mayhem in this film as well. The high-flying acrobatics (with some help from wires), the flurry of kicks and punches, and exaggerated impacts all help make the scenes appear as if it were a dance. This isn’t to say the characters are prancing and flying around everywhere all the time, but rather, these elements are used to support and build upon the base hardcore kung-fu combat. Even if you’re geared toward more physical, realistic fights (ala Ong Bak), you can’t deny the certain charm of Iron Monkey. I consider myself a slight detractor from “wirefu”, but it’s impossible NOT to be in awe of the masterfully-concocted mysticism of Yuen’s fight scenes. The numerous battles are all somewhat different from each other, keeping the action alive and fresh throughout. Creativity really shines. Like all good kung-fu movies, Iron Monkey provides memorable fights that you’ll even remember down the road. So sit back and be sure to absorb the beauty of Yuen’s work.

The actors make the story work. Each person is casted convincingly. The young girl who played the part of Wong Fei Hung has serious skill! I also loved the major bad-guy. He brings back memories from the classic, old-school kung-fu flicks. Embodying a powerful arrogance, an elaborate costume, the whimsical ‘stache and beard, and (most importantly) the Buddha Fist(!), Yee Kwan Yan makes for one kick-ass villain.
Movie Quality: 9/10

The print is presented in 1080p/AVC MPEG-4 with a 1.85:1 aspect ratio. Yet another Kung Fu release this week from Miramax, but with a video presentation that is above average for high definition. I found colors to be on the softer side than I would have expected. The film preserves grain very well like with the DVD release and it never gets out of hand. Black levels are good with daytime scenes, but falter in darker scenes. While there are strong points to this transfer, the worst part comes with the night and darker scenes which look horrible. This is a huge problem in my view which throws off the look of the film.
Video Quality: 6/10

The audio is presented in English DTS-HD MA lossless 5.1 mix. Many will be disappointed here that the original Chinese language track is only available in Dolby Digital 5.1 mix instead of a lossless track. I do not understand why these studios continue to use a lossy track for films that have a foreign language track that is the original audio mix. During the action scenes there is quite a bit going on in the soundfield. Dialogue through the center channel was clean and crisp with no apparent issues.
Audio Quality: 6/10

Yet another disappointing Kung Fu pack release that Miramax decided not to give proper treatment to. While “Hero” was the best of the bunch, this film comes in second in terms of video and audio. If you are a fan of the film, this is a definite upgrade but the price could be what holds this release back. I never understand asking full price on catalog titles, it just hurts the format.
Overall Rating: 6/10