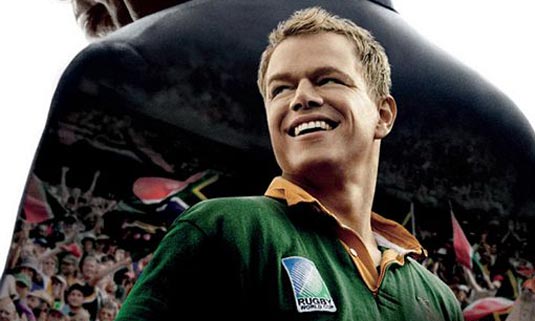 After South Africa elected Nelson Mandela president, the racially divided country could’ve easily erupted into civil war. In Clint Eastwood’s determinedly populist, yet heartfelt look back at that time, the director examines one of the more ingenious steps Mandela (Morgan Freeman in a performance of sly charm) took to prevent that from happening. Knowing that his country was set to host the Rugby World Cup in 1995, Mandela believed the national team could provide an example of reconciliation in action. Led by François Pienaar (an unbelievably buff Matt Damon), the mostly white Springboks inspired devotion among Afrikaners and disgust among native Africans. Instead of changing their name or colors, Mandela encouraged them to win for the sake of their homeland. During the year leading up to the event, the team learns to work together as never before, just as Mandela’s newly integrated security detail, a combination of cops and activists, finds a way to bridge their ideological differences. By the time of the big day, the poorly ranked Springboks are well equipped to hold their own against New Zealand’s All Blacks (so named for their uniforms, not their racial composition). Drawing from John Carlin’s Playing the Enemy, Anthony Peckham’s script takes its title, Latin for “unconquerable,” from a British poem Mandela held close to his heart during the 27 years he spent in prison. If Damon’s accent is more convincing, Freeman serves as the film’s heart–and as a timely reminder that reconciliation is never easy, but that it will always trump revenge. 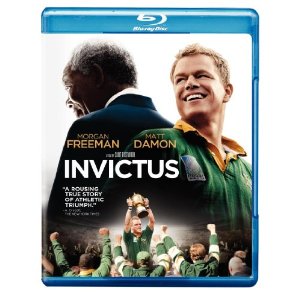 The film sports some incredibly accurate and authentic rugby scenes (I am a fairly new supporter of the sport beginning from the 2003 World Cup- I would also recommend “Forever Strong” for some of you rugby fanatics), accurately demonstrating the pulverizingly brutal, but ultimately gentlemanly nature of the warriors who play this incredible sport. More importantly, and what I always believe makes a sports movie rise above the rest is the story of the people in it. This movie is equal parts Francois Pienaar (M. Damon), and Nelson Mandela (M. Freeman). The genius of Mandela was in sensing the incredible power that Sport had over the previously ruling White Class, and in selling his political plan for unification of South Africa by bringing about reconciliation between whites and blacks. Mandela does this by convincing Francois Pienaar (captain of SA national Rugby team) and by extension, the Other SpringBoks (nickname for South African Rugby squad) that a victory in the 1995 Worldcup would unify South Africa, even though skepticis abounded at at every turn.

Mandela exhibited political genius by being able to credibly assert to his supporters (who wanted all symbols associated with Springboks eliminated from national discourse) that if he, who had suffered worse than most under apartheid could forgive (and his suffering is given some treatment in the movie in a trip by the Springboks to Robben Island where Mandela was imprisoned and where the players see what he had to actually endure), than they should also be able to forgive, and move on in bringing together the new South Africa- both black and whites. Mandela knows and gambles ultimately on the unifying power of Sport itself and particularly the Springboks who are revered by White South Africans, but hated by Blacks as they represented a symbol of apartheid and opporession.

Slowly through a series of political maneuvers and with the help of Francois Pienaar who slowly begins to understand and believe in Mandela’s plan, and even begins to understand what it means to be South African, and redefines his national identity. How Mandela does this is in my opinion the result of some real political genious and courage.

Clint Eastwood, once again, delivers a terrific film. There are just so many moments of this movie that I absolutely love and cannot wait to see again. So many minor characters that leave grand impressions (like Mandela’s head of security and many of the white security forces who are working with Mandela’s security team to keep him alive and safe). The scenes never feel forced or cliched.
Movie Content: 9/10

The print is presented in 1080p/VC-1 with a 1.85:1 aspect ratio. Color is vibrant and bold in this transfer. A very good example of that is the color red, when blood splats on the floors, walls, and in the air. The film is so colorful that it is very good in details. There are also moments though where the transfer does lack in a few areas. Lighting was a problem in a few scenes where there appeared to be too much light in the background.
Video Quality: 9/10

The audio is presented in DTS-HD MA lossless 5.1 mix. This is one of those audio mixes which is dialogue driven and fills the soundfield during the key rugby games. What is impressive here is that there is always effects going on in the soundfield during the rugby games, albeit it being discreet sounds through the rears or dynamic effects that immerse the viewer. Dialogue is clean through the center channel with no apparent issues.
Audio Quality: 9.5/10

This is yet another great film from Clint Eastwood with both Morgan Freeman and Matt Damon putting in stellar performances. The audio mix is well done taking advantage of the Rugby scenes filling the soundfield. I highly recommend picking this film up on Blu-ray if you were a fan and if you are on the fence I would give it a rental.
Overall Rating: 8/10