Into The Blue 2: The Reef DVD Review

Posted in DVD Reviews by George Theofanopoulos on 20 May 2009 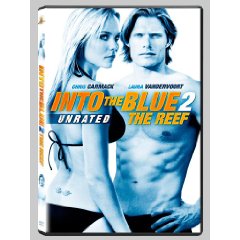 I wouldn’t have thought it possible to make me appreciate Fool’s Gold. Fool’s Gold impressed me in how thoroughly it wasted the talents of Donald Sutherland, Kate Hudson and yes, even Matthew McConaughey. A comedy in the Caribbean looking for lost treasure that just never delivers. It was a shame. But Fool’s Gold, for all its failings looks and sounds like a masterpiece when put up against Into the Blue 2: The Reef, the most recent direct-to-DVD sequel of a movie no one cared about even with Jessica Alba in a bikini. By all accounts that’s normally enough to turn some heads – and apparently it turned just enough to warrant a sequel of the crappiest caliber. Yes people, it’s that bad.

Sebastion (Chris Carmack) and Dani (Laura Vandervoort) live the idyllic life of SCUBA Divemasters in the Caribbean looking for unclaimed treasures worth millions – but thus far their search has been unsuccessful. One day a smarmy British guy named Joshua (David Anders) and an alluring mysterious woman named Azra (Marsha Thomason) offer the diving duo a proposition: help them find a mysterious cargo for which they alone have the coordinates. Promised enticing amounts of cash, the pair signs on only to discover what the audience knew as soon as Joshua and Azra appeared on screen: the offer isn’t on the level, they have ulterior motives. The acting of Into the Blue 2: The Reef reaches a whole new level of bad. Ignoring the fact that every word spoken by the two leads grates our nerves, we’re still left with David Anders and Audrina Patridge who are unbearable to watch.
Movie Content: 6/10

I didn’t enjoy this film and the bad acting didn’t help matters. This is a film that I can’t recommend unless you are a fan of beach type movies.
Overall Rating: 5/10