“I prefer a story that has the good sense to stay on the page–where it belongs!” declares Elinor Loredan (Helen Mirren, in fine upper-crust form) in Inkheart, a rollicking adventure that appeals to adults as well as tweens and teens. But if Elinor got what she wanted, viewers would not–for the delicious premise of the film (based on Cornelia Funke’s best-selling novel is that book lover Mo Folchart (Brendan Fraser) has discovered a way to bring book characters to life. That means that adorable Toto from The Wizard of Oz is suddenly yapping under Mo’s daughter Meggie’s (Eliza Bennett) bed. But it also means that somewhere, a real person or thing has been sucked into the book world–battling flying monkeys and evildoers that suddenly are real threats. The film is crisply directed by Iain Softley, and Fraser and his costars (including Mirren, Paul Bettany, and Jim Broadbent) are worthy, watchable characters who appear to be having as much fun as the audience. And the film’s pro-book message will please young book readers, and their parents, who know that a good adventure in one’s imagination can never be rivaled by anything on any screen, of any size. 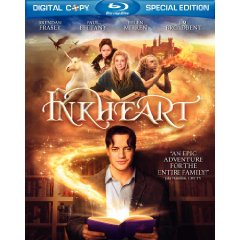 Mo’s troubles start because he is unaware he has such an ability (humans with this skill are known as Silvertongues). He reads the story of Inkheart to his young daughter and wife, unleashing the dastardly villain Capricorn (Andy Serkis), along with the roguish fire-juggling Dustfinger (Paul Bettany). Mo’s wife vanishes and Capricorn sets about building himself an army of storybook henchmen. Mo vows never to read another book out loud and so twelve years pass without incident. His daughter Meggie (Eliza Bennett) has grown up and wonders about Mo’s obsessive quest to obtain another copy of the Inkheart book to try and correct his decade-old error. When he finally finds another copy in an antiquarian bookshop, Dustfinger reappears, begging the Silvertongue to return him to his world; when Mo refuses, the ilk of Capricorn is summoned to force compliance.

There are well-intentioned themes (involving the power of reading and writing among others) floating around in the story of Inkheart, but the film fails to fully illustrate the creativity of the major concepts. The villains are of course unthreatening (this is a kid’s movie after all), Helen Mirren’s supporting role is wasted, and each of the characters is designed in the most generic manner. For a plot that is already incredibly outlandish and difficult to accept, it’s odd to cast Brendan Fraser, who brings an instant air of goofiness and tongue-in-cheek humor to a character that would have been more effective if played seriously.

In one scene a Silvertongue is forced to read out of various books to prove her skill; as the camera pans across the room the audience can see Cinderella’s glass slipper, Huckleberry Finn’s raft, a gingerbread house from Hansel and Gretel, the Sword in the Stone and many more recognizable storybook entities. It’s at this moment, with countless novels at the creator’s disposal, that we acknowledge the biggest disappointment: imagining what could have been. What an amazingly unique concept with such mediocre execution.
Movie Content: 7/10

The print is presented in 1080p/AVC MPEG-4 with a 2.35:1 aspect ratio. ‘Inkheart’ excels in the color department with some strong stylized visuals. With the style that was used for the film, it gives an almost painting like image during the dream sequences. This is done intentionally to give you the illusion of being in a fantasy world. Details are very good with the costumes themselves and they really pop. Blacks are also deep. The CGI also looks very good and well placed with the live action scenes. There is also a slight hint of grain throughout the print.
Video Quality: 9/10

The audio is presented in DTS-HD MA lossless 5.1 mix. The sound is excellent as the soundfield gets a good workout from the various sound effects of the film. The dynamic range from the rears is very good as you hear sounds go from one surround to the next. Dialogue is clean and crisp through the center channel. Not once did I have to worry about adjusting the volume. It is a well balanced mix.
Audio Quality: 9/10

All features are presented in high definition, except for the deleted scenes which are in standard definition.

‘Inkheart’ is a decent film geared more towards the younger crowd. Brandon Frazier knows how to take scripts that aren’t the greatest and turn them around to decent films. On Blu-ray the film looks and sounds good giving the film that much needed fantasy immersion.
Overall Rating: 8/10