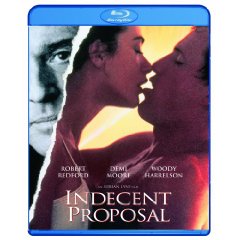 Adrian Lyne buffs the premise of Honeymoon in Vegas to a fine gloss in this yuppie melodrama that poses the conundrum of whether the loving husband of an equally loving wife will accept $1 million to allow his wife to spend one night with a billionaire who looks like Robert Redford. All the cynics please take a number and form a line at the right. Demi Moore and Woody Harrelson play Diana and David Murphy, high-school sweethearts who marry and who are doing very well — Diana is a successful real-estate agent, and David is an idealistic architect who has built a dream house by the ocean — until the recession hits. Suddenly, David loses his job, and they can’t make the mortgage payments. Dead broke, they borrow $5000 from David’s father and head to Las Vegas to try to win money to pay the mortgage on their house. At first, they get $25,000 ahead — but inevitably the house always wins, and they end up losing it all. While Diana is in the fancy casino boutique trying to lift some candy, she is spotted by billionaire John Gage (Robert Redford), who is immediately attracted to her. John invites Diana and David to an opulent party, and it is there that John offers David $1 million for a night with his wife. David is wracked by this moral dilemma, but Diana finally makes the decision on her own, with ensuing consequences for their ideal marriage and their bank account.

The moral to the story, without needing to go into Christian theology or anything else is really simple: there’s no such thing as a free lunch. I remember when the movie was out in the theaters and the many sound bite talk show people would ask guests and people on the street if they would do what the couple Demi Moore and Woody Harrelson did in the film; so many fools said “yes, in a heartbeat” and I wondered about the education system of our country! The line of the stylish Robert Redford when Demi Moore accused him (while slowly being seduced by him) of being a man “who likes to own things” summed up the whole movie: “You think I need to BUY women?” Redford, a man in this movie who as a billionaire has seen and caused the birth and death of multi-national corporations the size of ancient civilizations, knew exactly what would happen to their marriage, and to their mind- and to her heart, if they knowingly accepted this proposal most indecent.

He depended on their arrogance and scoffing at the fragile nature of human relationships and the invisible architecture of the human soul; knowing, like every man (and woman) with a secret plan for another human being, that that would bring about the predictable but unexpected chain of outer events. The movie’s most poignant turn, however, is when he reveals the road not taken in his life, with all his billions, and how that has generated much of his actions. Only then do we really discover under no uncertain terms what he wants, and what he is willing to do to get it. That really begins the falling domino of epiphanies that leads to the revealing of the gentle, fragile and beautiful hearts of all three of the characters, and the transcendent power of love, committment and surrender.

It’s a good guy/girl movie as well, because Woody Harrelson is so much the All-American man, full of rambunctious flaws and money problems (can’t relate), where Robert Redford is, well, Robert Redford; he is the next best thing to Sean Connery’s James Bond in this movie when it comes to the debonair, power- broker man the women couldn’t resist if he had a 30k a year job, let alone making 30k every couple of hours.
Movie Content: 7.5/10

The print is presented in 1080p/AVC MPEG-4 with a 2.35:1 aspect ratio. The film is 16 years old, the film offers an above average rating against other catalog titles. By no means is this bad. Colors are strong and bright throughout the print offering a decent pop to the image. Black levels are deep. Details were good in several scenes on up close shots, but when the camera panned away there was a loss of detail. There is grain in the film which is not consistent throughout the print. This can get a bit distracting at times. For fans of the film, you will not be disappointed.
Video Quality: 6/10

The audio is presented in Dolby TrueHD 5.1 mix. ‘Indecent Proposal’ is a dialogue driven film, providing a front heavy experience. The dialogue was clear and crisp with no apparent issues. The mix is well balanced with the low usage of the surrounds. The rears do get some use with the soundtrack, but do not offer the excellent depth. I would say that this mix was sufficient enough for this type of film, but not sufficient for the upgrade to high definition.
Audio Quality: 7/10

Only an audio commentary is presented for the special features which is rather disappointing.

I have never been a huge fan of ‘Indecent Proposal’ due to the premise of the film. The acting is really good with Robert Redford, Demi Moore, and Woody Harrelson really lighting up the screen. On Blu-ray I was a bit disappointed with the audio and video presentation. Then add insult to injury with a lack luster feature set. I recommend this as a rental for those that are curious.
Overall Rating: 7/10