Posted in DVD Reviews by George Theofanopoulos on 18 November 2010
Golden Globe® Award-winner Gabriel Byrne stars in an all-new season of HBO’s acclaimed half-hour drama series: In Treatment. Set within the highly charged confines of individual psychotherapy sessions, the series centers around Dr. Paul Weston (Byrne), who recently divorced his wife Kate, and has moved from Maryland to a brownstone in Brooklyn, New York. Rebuilding his practice while wrestling with some of the demons he left behind – including a lawsuit filed by the father of Alex, a patient who died last year – Paul takes on several new patients. He also commutes to Maryland every Friday to continue his own sessions with Dr. Gina Toll (Emmy®/Oscar® winner Dianne Wiest). 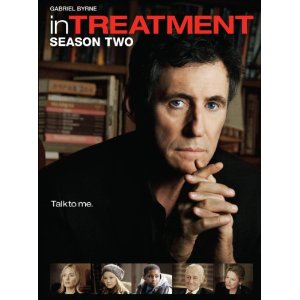 ‘In Treatment: Season Two’, is as riveting as season one. Gabriel Byrne, as Paul, continues as the impassioned psychologist, dealing with a new set of patients. He sees a female college student with lymphoma, a boy whose parents are divorcing, a female attorney who he was his patient twenty years prior, and an aging company CEO . Meanwhile, he continues to have both clinical supervision and personal counseling with Gina, Diane Wiest.

Paul struggles with many of the same issues that were difficult for him in season one – – boundaries with patients, his marriage, his relationships with his children and anger and dissatisfaction with his personal and professional life. On top of that, he is being sued by the father of a patient from Season 1.
In season One, and season Two, the patients are three-dimensional, and stunningly portrayed by the actors selected for the roles. Monday you see patient #1 & patient #2 in session, Tuesday patients #3 & #4. The following week, you watch all four patients continuing his/her treatment. Very clever arrangement. I’ve likely overdone this review, but I so enjoy each moment of the show.

inTreatment in not “light” viewing, and parental discretion is called for. Rather an opportunity to tune-in to a stunning look at people in emotional pain, and see them working hard to get better…and they are better for the effort. The series will either bind you to every episode, or leave you cold.

TV series do not get any better than this. As a clinical social worker and marriage and family therapist, I can vouch for the authenticity of the sessions. Therapists are human beings and ‘In Treatment: Season Two’ reminds the viewer of this with every episode.

In Treatment is a great show, and Season 2 was my favorite. The acting is incredible! You find yourself pulled into the characters lives, and you feel their emotions with them.
Overall Rating: 8.5/10