IMAX Under The Sea Blu-ray Review 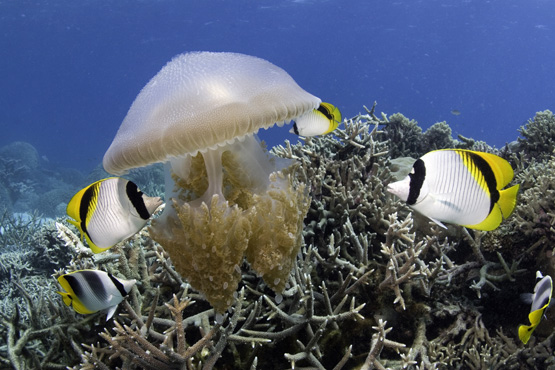 Filmed in IMAX 3D, Under the Sea is a strikingly realistic underwater exploration of the amazing sea life of the coral triangle in Papua New Guinea, Indonesia, and the Great Barrier Reef. Viewers instantaneously become divers, immersed in the coral reefs and floating mere inches away from sea life ranging from cuttlefish to venomous sea snakes, nautiluses, sea dragons, and great white sharks. Narrated by a surprisingly sensitive and (mostly) serious Jim Carrey, the film explores everything from how various species use color and pattern changes to communicate to the mating habits of cuttlefish and the symbiotic relationships between sea creatures as varied as the crab and jellyfish. Carrey points out that man’s actions have increased the oceans’ carbon dioxide levels–a situation which leads to ocean warming and acidification which could potentially upset the symbiotic balance of undersea life and result in dissolving the coral reefs and destroying multiple species of ocean life. The film ends on a hopeful note, declaring that man is beginning to take responsibility for his actions and now possesses the skills to mitigate his effects on the environment and preserve the ocean wonderland. The underwater photography in this film is absolutely stunning and the realism of the 3D format can’t be overstated. Viewers of all ages will be mesmerized throughout this 45-minute film and will leave with an important understanding about man’s vital role in preserving ocean life. 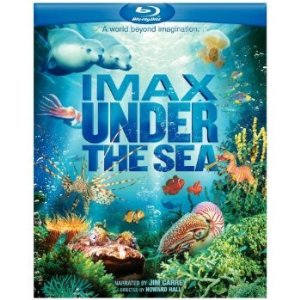 Filmed in the Great Barrier Reef of Southern Australia and the Coral Triangle of Indonesia mainly, the cameras get close-up with Cuttlefish, Leafy Sea Dragons, Garden Eels – and those are just the camouflaging organisms. You might be telling yourself, How Come I Forgot There Is Such a Thing as Sea Snakes? Or How Come I Forgot That Jellyfish Are Eaten By Other Fish? The 3D glasses make you feel like you’re in reaching distance and the overall visual and aural sensation lets you feel like you’re in the world’s grandest aquarium. That’s IMAX for you – reliable as cinema’s most accessible teleport.

For marine beauty, “Under the Sea” (directed by Howard and Michelle Hall, IMAX deep sea veterans) is the most visually astonishing and transporting since “Aliens of the Deep,” a 2005 IMAX film – available on DVD – made by none other than James Cameron. The Hall team is adept in getting all the necessary footage and drawing out resources: This “Sea” adventure is narrated by Jim Carrey, but his name shouldn’t be the drawing power. Carrey is an amiable narrator guide who occasionally gives us useful information (there’s a tadpole of didacticism about rising ocean temperatures causing harm to corral reefs). For the most part, the narration is customarily blithe and friendly which makes this all-audience friendly.

Breathtaking beauty is too commonly shrugged off and the familiar assembly line sequels and brand name movies are attended without thought and consideration to alternative. I wish that audiences would think more often outside the box, and instead of attending regular feature filmsthey would opt for an IMAX presentation – documentaries like “Under the Sea” lets you feel like you are discovering something new and attending an experience outside of archetypal moviegoing. Your sense of discovery is renewed.

It’s easy to think, as you watch the High-def footage of Under the Sea from your own living room, that the magical scenes of animals in their natural habitats going about their natural activities just magically appears on screens for us to observe. But, bonus features on the Blu-ray disc remind us that real people traveled all over the world and took painstaking measures to capture these mysterious moments. Filmmakers spent as much as six hours at one time under water watching, and waiting for creatures to appear and to perform their unique functions in the under water world.
Movie Content: 9/10

One would think that the IMAX screen would put some distance between audience and viewer, but thanks to the addition of 3D glasses, very smartly designed, each member of the audience has the feeling that the animals are sitting on their lap.
Overall Rating: 8/10