Ice Age: Dawn of the Dinosaurs opens with the stitched-together prehistoric family about to become a biological one: Manny (voiced by Ray Romano) and his mate Ellie (Queen Latifah) are expecting a baby mammoth. Unfortunately, this makes Sid the sloth (John Leguizamo) and Diego the saber-toothed tiger (Denis Leary) feel left out. Diego, who worries he’s losing his edge, decides to head out on his own, while Sid adopts three suspiciously large eggs that he’s found through a crack in the ice. Up to this point, the movie is perilously sappy–does anyone, particularly a kid, want to watch a kid’s movie about parenthood and impending middle age? Fortunately, the eggs turn out to be dinosaur eggs from a pre-mammalian underworld, and when the mama T-Rex comes to rescue her rambunctious little ones, Ice Age: Dawn of the Dinosaurs transforms into a delightful comic adventure. The emotional side of the Ice Age movies has always been a tad mawkish, so it’s smart that Dawn of the Dinosaurs emphasizes physical comedy. Clearly, the animators have been inspired by a wild fusion of Road Runner cartoons and Buster Keaton. The character of Scratte, with his non-verbal, monomaniacal efforts to get that last acorn (doubled in this movie with the addition of a female counterpart), is only the most obvious reflection of this sensibility. The animators have great fun with the differences in scale between the mammals and the dinosaurs, and the introduction of a deranged Australian weasel named Buck (Simon Pegg, Shaun of the Dead) pushes everything into Loony-Tune territory. Let Pixar tug at our heartstrings; Ice Age aims to tickle the funny bone and does a fine job of it. 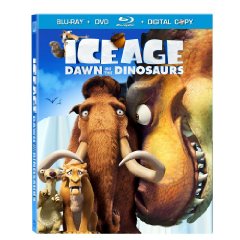 Ellie (Queen Latifah) and Manny (Ray Romano) are expecting their first child, and Manny is obsessed with making life perfect and safe for the family, since his first experiences as a husband and father went bad when his family was killed by hunters. At the same time, Diego (Denis Leary) finds himself unable to catch a cocky gazelle (Bill Hader) he has been stalking and decides to leave the herd, believing that he is losing his predatory nature as a tiger. Sid (John Leguizamo) grows jealous of Manny and Ellie and “adopts” three apparently abandoned eggs that he finds in an icy underground cavern and call them Eggbert, Shelly, and Yoko. Manny tells him to put them back, but Sid instead looks after the eggs, which hatch into baby Tyrannosaurus the next morning.

Although Sid tries his best to raise the three dinosaurs, their rambunctious behavior scares away all the other animals’ young and ruins a playground Manny built for Ellie’s baby. A female Tyrannosaurus, Momma, whose eggs Sid stole, soon returns and carries both Sid and her young underground, with Diego in pursuit.

I hate to say this, but it seems none of the four credited writers came up with a good story for “Ice Age: Dawn of the Dinosaurs.” The film’s storyline is not just contrived; it is often impossible. Why should pregnant Elle insist on joining the searching party, for instance? The film’s story only proceeds by constantly putting the characters in danger of falling, being eaten or crushed by animals or some objects.
Movie Quality: 8/10

The print is presented in 1080p/AVC MPEG-4 with a 1.85:1 aspect ratio. Some parts of this animation are impressive, while others the CGI does not look as good. The problem is that with a lower budget certain areas will suffer. This is a very colorful film that is vibrant and pops. With a strong color palette, it brings out the fine details. Black colors are deep looking. Taking all these strong elements, they produce one sharp looking picture. My only complaint again is just some of the CGI not looking up to par.
Video Quality: 8.5/10

The audio is presented in DTS-HD MA lossless 7.1 mix. With this mix, all my speakers were working for their money. The dialogue comes out of the center channel very clean and crisp. I found the balance to be mixed very well between the soundfield and dialogue. I am glad that finally more and more releases on Blu-ray are coming with well balanced audio mixes.
Audio Quality: 9/10

The first Ice Age was something new, fresh, funny & had the advantage of being one of the more successfull CG animated films that didn’t come from Disney or Pixar. Ice Age 3 has none of these advantages. There is nothing really new here, but fans will enjoy this third film.
Overall Rating: 8/10