I Still Know What You Did Last Summer Blu-ray Review 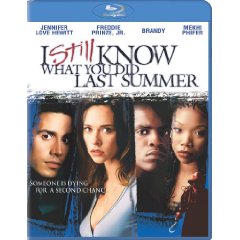 There was so much story left to tell after I Know What You Did Last Summer that the filmmakers brought back all the beloved, surviving characters from the first film for this sequel. Ray (Freddie Prinze Jr.), Julie (Jennifer Love Hewitt), and Julie’s white tank top (Jennifer Love Hewitt’s white tank top) return to once again face a hook-wielding maniac. Not satisfied merely to repeat a theme, director Danny Cannon and screenwriter Trey Callaway add variation by introducing Karla (Brandy) as Julie’s best friend in the whole wide world. Karla and Julie have won a summer trip to the Bahamas with their current infatuations but find that they’ve arrived at the start of the storm season and that at their hotel “Do Not Disturb” signs should flip to say “R.I.P.” One can only hope to hang just such a sign on this repetitive, tedious franchise, especially since this version is less scary than the price of beer in those little hotel room refrigerators. Definite contender for Gratuitous T&A Shot of the Year (it’s of Hewitt and that’s not meant as a recommendation).

It might not have been the greatest movie ever made but, thanks to the canny direction and score, ‘I Know What You Did Last Summer’ was a very effective thriller. Shame the same can’t be said of this sequel, which crams in every slasher cliché known to man with such little awareness of how hackneyed it all is that it actually seems to believe this is scary stuff. In a fit of apparent desperation, writer Trey Callaway packs Julie (Hewitt), survivor of the first film, off to an island in the Bahamas when she wins a holiday thanks to a radio show calling her number. Joining her is fish-faced Karla (Brandy), her boyfriend Tyrell (Mekhi Pfeiffer, who I seem to remember used to have a promising career) and spare wheel Will (Matthew Settle). Joining them soon after that is the killer fisherman, who engineered the prize (the fact that Julie’s number’s unlisted doesn’t set off any warning bells) and proceeds to slice his way from one end of the movie to the other.

Hewitt turns in a very decent performance, but the rest of the actors range from marginally talented to just plain terrible. The script seems like it was written in one day, the photography is dismally bad, the editing is overly-frantic and the direction is hack-level. But, it is entertaining. This is one of those movies where you couldn’t care less who bites it next, so the kills don’t exactly tug at your heart.
Movie Content: 5/10

The print is presented in 1080p/AVC MPEG-4 with a 2.40:1 aspect ratio. Color management is excellent with the style that is being used in the film. Colors are bold for a catalog title, but there are some scenes that also have softness. Black levels are rather deep. This is a nicely detailed film due to strong color management and deep blacks. There were a few scenes where details were lost, but it wasn’t anything drastic. There are no blemishes on this print at all, it looks clean with a subtle use of grain throughout the film. The one issue that hampered this nice presentation was the noise in the print.
Video Quality: 8/10

The audio is presented in DTS-HD MA lossless 5.1 mix. The audio mix is offers some decent range into the soundfield. This is more of a front heavy experience, especially during the scenes when it is raining as they push forward. I do think that a film like this could have taken advantage of the soundfield a bit more due to the sound effects alone. Bass management had a bit of an issue, it was lacking an real punch. Dialogue was clean through the center channel with no apparent issues.
Audio Quality: 7/10

All special features are presented in standard definition.
Special Features: 3/10

Sequels are either better than the original or they take a complete nose dive, and I felt that ‘I Still Know What You Did Last Summer’ teeters in the middle. It is entertaining, but the issue is that you get that been there, done that feeling. On Blu-ray the film sounds and looks good which is worth the upgrade from DVD albeit the lack of special features.
Overall Rating: 7/10

« Leverage Season 1 DVD Review
So You Think You Can Dance: Get Fit – Cardio/Tone & Grove DVD Review »