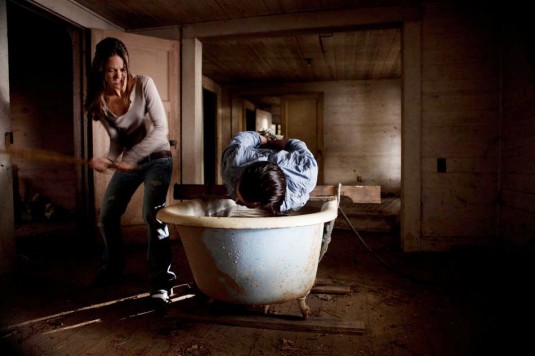 The original version was reviled, condemned, and banned around the world for its on-screen depictions of depravity and violence. Now experience the acclaimed remake that dares to go even further: Jennifer Hills (a fearless performance by Sarah Butler) is a big-city novelist who rents an isolated country cabin to write her new book. But when she is brutally raped by a group of sadistic rednecks, Jennifer has plans for more than mere revenge. One-by-one she will find them. She will inflict horrific acts of agonizing torment upon them. And no jury in America would ever convict her. Jeff Branson (“ALL MY CHILDREN”), Daniel Franzese (BULLY), Rodney Eastman (A NIGHTMARE ON ELM STREET 3 & 4), Chad Lindberg (THE FAST AND THE FURIOUS) and Tracey Walter (THE SILENCE OF THE LAMBS) co-star in this graphic, shocking and undeniably disturbing new take on one of the most controversial films of all time. 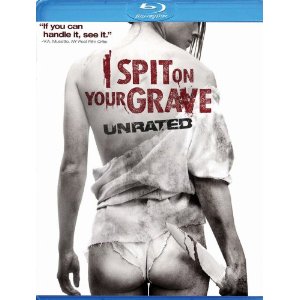 I Spit on Your Grave teases the impending nightmare that you know isn’t far from taking place. Tense music and doors banging in the wind suddenly along with a girl walking around barely clothed in the woods just seem to string the audience along until the rape scenes (that’s right, more than one) finally take place. It’s incredibly hard to watch and practically unbearable. Rape is really the furthest thing from entertaining, but that’s probably the point with this kind of film. It gives the audience a chance to be in Jennifer’s shoes. Not that they’d want to be. You’re forced into knowing the hell she went through so that her revenge seems that much sweeter in the long run.

Jennifer’s revenge in the film on the men that did this to her is really the main reason to see this. The film is still far from charming, but the second half is captivating in a sick kind of way while revenge is where the film’s creativity lies. Jennifer’s use of fish hooks, a bear trap, duct tape, lye, hedge clippers, pliers, and a shotgun are all done in pretty unique ways. The horror fan in me that craves blood and gore was strangely satisfied seeing these men get what they deserved while the other side of me that is looking for another fun and entertaining trip to the movie theater was disgusted.

There were a few concepts in the film that made me raise an eyebrow other than the obvious. Some of the things that came out of the mouths of this group of cliche rednecks were beyond asinine, but that was probably the point. The whole “pretty little showhorse” routine was just bizarre. After the first rape scene where the men make their exit and leave Jennifer alone, she wanders off into the woods with nothing on below the waist. Besides being in a drugged-like state and being in shock, it just seemed like one of those situations in a horror movie that ends with you yelling at the screen wondering why the character didn’t do anything else instead. You also never really find out what happened to the sheriff’s daughter.

Why she wasn’t involved in a larger capacity in that final trap is kind of mindboggling. I was expecting her to be in Matthew’s place or at least be forced to watch the tape of what her dad had been busy doing out there on the job. Lastly, since when does a writer from the city know how to set up these traps? It’s like Jennifer dated MacGyver or something. The same people who complained about Jason in the Friday the 13th remake are going to have a field day with this concept alone.

The print is presented in 1080p/AVC MPEG-4 with a 2.35:1 aspect ratio. This is a very stylized film with various dark colors used throughout. The color palette takes advantage of colors such as oranges and reds standing out the most. Black levels are deep with an ink like look. Details are excellent providing various sense of depth. Scenes up close and when the camera pans away show some nice details. I was surprised how nice this darker looking film looks in high definition.
Video Quality: 9/10

The audio is presented in Dolby TrueHD 5.1 mix. This mix does a good job from a dialog and soundfield perspective. The surrounds work very well with the sound effects that are used from the score. Dialogue comes through the center channel very clear and crisp. This is a very immersive sound mix with bass also being properly spaced out.
Audio Quality: 9/10

“I Spit on Your Grave” is incredibly reminiscent of “The Last House on the Left”. It’s an exploitation film that pushes the boundaries of what the audience can sit through without becoming completely nauseated and leaving altogether. The first half of this film is not for the faint of heart with the rape scene alone, but if you can get past that part, this is a good revenge story underneath. If you like horror and exploitation films, you will enjoy the remake of “I Spit on Your Grave”.
Overall Rating: 7/10