Writer-director Meir Zarchi’s controversial story of rape and revenge has lost none of its ability to shock viewers since it first gained notoriety in the late ’70s. Camille Keaton (grand-niece of Buster Keaton and, later, Zarchi’s wife) stars as a young woman who is terrorized and then brutally assaulted by four men while on vacation. After slowly pulling herself together, she methodically tracks down and butchers each of the perpetrators. Zarchi’s film has been consistently accused of celebrating violence against women, and while the rape scenes are graphic, they also lack the voyeuristic qualities that earmark other similarly plotted exploitation films. If anything, Zarchi is guilty of awkward scripting; the dialogue is leaden, and Keaton’s transformation from victim to avenger is too swift. But to label him a pornographer is wrong, and while the film is challenging–perhaps more than most audiences can bear–its depiction of the psychology of violence is undeniably powerful. 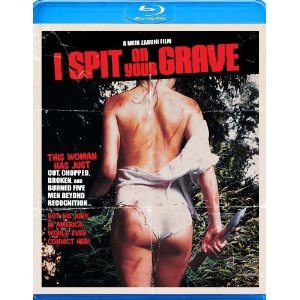 When movies first came out on video there were two legendary exploitation films I had to track down. One was “The Texas Chainsaw Massacre” and the other was “I Spit on Your Grave,” which is actually the more memorable film of the pair overall (although I do grant the highest place to the “hook” scene in TCM). Director Meir Zarchi’s 1978 film has become rather infamous, since critics hated it, audiences were outraged, and the film was banned in Germany and Great Britain. The story, such as it is, finds Jennifer Hill (Camille Keaton, Buster’s grand-niece) out in the woods of Connecticut to work on a novel when she crosses the path of some local boys who decide she should be the first sexual partner for their mentally-disabled friend. When he cannot complete the rape, his friends do it for him. Then they decide that they are not done with Jennifer.

At issue are not Jennifer’s specific acts of revenge, including the infamous bathroom scene, but rather the series of brutal rapes that precede them. I do not want to meet anyone who is not disturbed by these rape scenes and I think it is fairly obvious that Zarchi intended to make audiences uncomfortable. In retrospect you have to wonder about all those movies with rape scenes that do NOT upset the audience (the current obvious exception that proves the rule would be what happens in “Monster” right before the first murder). But Zarchi certainly pours it on thick, absolutely assuring that things go beyond the tolerance level of anyone who watches this film. So the bottom line is that this film will upset you and it is therefore effective at doing exactly what it wants to do. I have always considered this an “X” rated movie although I would not consider it pornographic in the traditional sense. But it is a very disturbing film and I do not think I would want my kids to see it until after they graduate college (if ever). Anyone renting this film for cheap thrills is in for a shock.

As I now understand it, this 1978 film was originally released as “Day of the Woman,” but that rather innocuous title was replaced by the well known “I Spit on Your Grave,” although the film was also screened as “I Hate Your Guts” and “The Rape and Revenge of Jennifer Hill.” All of this is interesting since it seems the producers were trying to pass off this film with both higher and lover levels of presentation.

The print is presented in 1080p/AVC MPEG-4 with a 1.78:1 aspect ratio. The original “I Spit on Your Grave” was shot on a very low budget and was very noticeable across the various home video formats this was released on. This film was never meant to look fantastic and if you are going in hoping for this film to look like a million bucks you will be sorely disappointed. If you are a fan of the original film, then you will enjoy this presentation on Blu-ray as this is the best the film has ever looked. Colors are good, but not overly fantastic as I expected.
Video Quality: 9/10

The audio is presented in Dolby TrueHD 5.1 mix. This is a dialogue centric film that is the main focus. For those going in expecting an intense and complex audio experience you might be a little disappointed. This is more of a front heavy audio experience with the front channels handling the load. There are some effects that peer through the rears providing some ambiance into the soundfield. While this is not a bombastic soundtrack, it is the best that the film has sounded for home video.
Audio Quality: 9/10

“I Spit on Your Grave” remains an undisputed classic in the rape and revenge genre, and its notoriety as such has kept it banned in countless countries around the world for over thirty years. To say that it is nothing more than despicable exploitation, however, is to blindly overlook many of stronger points that Meir Zarchi brings to the screen.
Overall Rating: 8/10