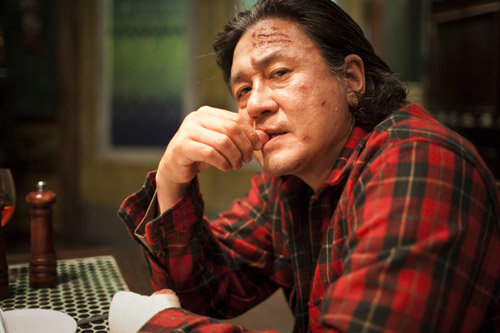 Korean director Kim Ji-woon first garnered a reputation as an ace assimilator of outside styles, most notably for the ickily Freudian J-horror thriller A Tale of Two Sisters and the monumentally goofy spaghetti Western pastiche The Good, the Bad, the Weird. I Saw the Devil finds the filmmaker moving towards a style much closer to home–namely the Korean revenge thriller, best typified by movies such as Oldboy, Memories of Murder, and Nowhere to Hide–with results that vary between masterfully staged and punishingly gross. Beginning with an impeccably uneasy snowbound abduction scene, the story follows a dashing secret agent (Byung-hun Lee) sworn to track down the murderer of his pregnant fiancée. Upon finding the maniac (Oldboy’s majestically disheveled Min-sik Choi), he implants him with a tracking device and proceeds to follow him across the country, swooping in to torture him at random intervals. Clocking in at 144 minutes, Ji-woon’s film clearly believes in a more-is-more policy, with ideas about the futility of revenge and the dangers of staring into the abyss taken to their graphic extremes. Viewers with strong constitutions will find much to chew on. Anyone else, however, should be prepared to dive behind the couch at a moment’s notice. 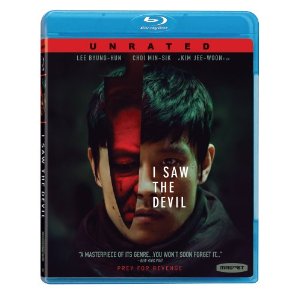 Director Jee-woon Kim along with actors Byung-hun Lee and Min-sik Choi are three of the most talented people in Korean cinema today. Jee-woon has done such films as A Bittersweet Life and The Good, the Bad, the Weird, which both starred Byung-hun and Min-sik is most recognized for his performance in Oldboy, but was also fairly impressive in the drama Crying Fist among many others. Oldboy is really the film that made me love Korean cinema. So when word broke that these three marvelous people were getting together to make a film, I knew I was already there. A little thriller called I Saw the Devil came together and became one of the most spectacularly intense thrillers to be released in quite some time.

Jee-woon Kim certainly knows how to shoot a beautiful looking film. Lush and vibrant colors make grisly murders and spontaneous revenge tactics look much more pleasant than the blood that endlessly splatters all over every wall and floor in the film. Other than the brilliant colors, the cinematography is rather unique as well. There’s a scene near the end of the film where Dae-Hoon is walking toward the camera on a deserted road. It’s simple and shot like we’re basically walking backwards in front of him while staring directly at his face. He eventually begins to cry; an uncontrollable sobbing. The way the scene is shot along with Byung-hun’s performance made it one of the more memorable scenes in the film. There’s another where Kyung-Chul gets picked up by a taxi. He gets into the front passenger seat while there’s another man in the back, so there are three people in the car altogether including the driver. Kyung-Chul realizes he’s going to have to beat these guys to the punch, so as their adrenaline escalates the camera rotates around the inside of the car. You get this continuous 360 degree shot of the action occurring inside this cab. It’s amazing.

Leave it to another Korean thriller revolving around revenge to make an impression on me. Jee-woon Kim’s I Saw the Devil is a superbly acted, exceptionally written, grotesquely gorgeous film that’ll make you cringe during some of the more horrific and blood soaked acts in the film while secretly leave you craving so much more. That craving is satisfied thanks to the interactions and chemistry between actors Byung-hun Lee and Min-Sik Choi. The disturbing content in the film is more than enough to satisfy the hungriest gore hounds out there while the captivating story will please anyone looking for something more than someone being chopped to pieces. I Saw the Devil is one of the most morbidly delightful films to be released in recent years.
Movie Quality: 9.5/10

The print is presented in 1080p/AVC MPEG-4 with a 1:85:1 aspect ratio. This is one of those films that will make you happy owning on Blu-ray. From the colors to the details, your jaw will drop if you look for some of the superb details. Colors are vibrant providing an excellent looking picture. Flesh tones are natural and accurate looking. Blacks look inky. Details are where this film shines the most with the camera even panning away in many scenes. Not once did I feel like I was at a loss for details making this a very strong presentation.
Print Quality: 9.5/10

The audio is presented in a DTS-HD MA lossless 5.1 mix. The rears provide quite a few times where sound effects panned across the speakers. There are many scenes that are outside which also take advantage of the soundfield providing some dynamic sound. Dialogue is clean through the center sounding ever so crisp.
Print Quality: 9/10

“I Saw The Devil” is a brutal/gory but not to gory film that will lead you down a road with a psychopath and a man who becomes one out of grief and anger in order to get revenge! As far as acting, it was great as was the score which fit the movie perfectly. Every year there is one or two horror movies that really standout, “I Saw The Devil” is 2011’s standout horror masterpiece that deserves to be seen!
Overall Rating: 8/10