I Love You Man Blu-ray Review 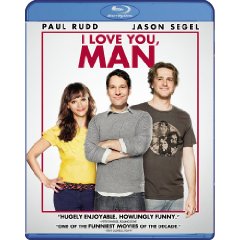 At once sweet, genuinely funny, and painfully awkward, I Love You, Man is that type of film that used to feel like a rare event, but these days is a lot more common thanks to Judd Apatow’s new hit factory. His stock ensemble of actors, writers, and directors have managed to hone in on the perfect formula of raunchy and sweet.  Apatow wasn’t involved in this production, but his mark is all over it just the same.  Paul Rudd has to be the most infinitely likeable man in Hollywood; he manages to capture the ideal blend of sincerity and awkwardness but never comes off as annoying.  As Sidney, Jason Segal departs from the neurotic and insecure roles that have nearly made him a household name in Freaks and Geeks and Forgetting Sarah Marshall.  He channels instead the endearingly arrogant and emotionally stunted man-boy who is both life of the party and sad clown.

The story is pretty simple–making friends tends to get more and more challenging as we get older and more settled into our lives.  That’s never been truer than for Peter Klaven, a so-called “Girlfriend Guy” who’s never really had a best guy friend.  As Peter begins to plan the rest of his life with the girl of his dreams (Parks and Recreation’s Rashida Jones), the pressure to find a best man and not feel like a friendless freak becomes more intense.  Enter Sidney, a Venice Beach-dwelling, super-laid-back, Rush-loving, vaguely employed (but clearly successful) financial planner with no desire to commit, a room in his house dedicated to all things masculine and an intense desire to have a good time as often as possible.  Soul mates, right?  As directed by John Hamburg (Along Came Polly, Stella), I Love You, Man is consistently funny and totally relatable.   With strong supporting performances from Jones, Andy Samberg, Jon Favreau, Jamie Pressely, and even Lou Ferrigno (!), I Love You, Man is a little less raunch and a lot more sweet than some of this crew’s other hits, with quite a few laugh-out-loud moments.

Two of Judd Apatow’s familiar rep company star. Finally at the center of a major movie, Paul Rudd is ideally cast as Peter since the role takes advantage of how he combines his boyish charm and unpredictable nebbishness into a memorable character. In fact, he manages to give Peter’s awkward attempts to overcome his social anxiety a certain emotional resonance. We feel every painful step he takes in replicating Sydney’s free spirit, and it becomes easy to root for his success. Much better cast here than as the self-conscious lead in last year’s Forgetting Sarah Marshall, Jason Segel offers his doughy likeability to a role that suits his casual, lumbering personality, even when he exposes an intimate secret between Peter and Zooey in a wedding party dinner toast.

The supporting cast is universally good. Jane Curtain has a few nice moments as Peter’s mom and JK Simmons is remarkably fresh as his dad. Andy Samberg plays his gay brother, a nice supporting role with some funny moments. This is a smart move for Samberg. His first starring role in “Hot Rod” was a resounding dud, so he appears to be building his career back by taking smaller, more memorable roles in better films. And he continues to provide a lot of laughs on “Saturday Night Live”. Jaime Pressly and Jon Favreau are hilarious as Zooey’s best friend and her husband. And the rest of the guys who play Peter’s potential BFFs are all funny for their moment in the sun.

This is a refreshing and insightful film! This might be news to some people – but all well-adjusted human beings have a yearning for emotionally rewarding relationships!
Movie Quality: 9.5/10

The print is presented in 1080p/AVC MPEG-4 with a 1.85:1 aspect ratio.  I found this print to be rather eye pleasing with vibrant colors. Fleshtones are very natural and accurate, considering that we see a few bare necessities throughout. Black levels are solid throughout. The image was also sharp with excellent details. The image is clean and pristine making this a very nice looking image.
Video Quality: 9.5/10

The audio is presented in DTS-HD MA lossless 5.1 mix. This film is a dialogue driven film. Dialogue was clean through the center channel with a nice degree of depth. I never had to raise or lower the volume to make out what was being said. The soundfield does get a few effects into play, but nothing major. The soundtrack takes advantage of the soundfield with audio also lightly pouring through the rears. I found this to be more of a front heavy experience due to the type of film.
Audio Quality: 9/10

All special features are presented in HD.
Special Features: 9/10

‘I Love You Man’ is a very hilarious film that exceeded my expectations. From the cast to the smart comedic lines you will not be disappointed. On Blu-ray the film looks and sounds very good. This is highly recommended for those looking for a smart comedy.
Overall Rating: 9.5/10