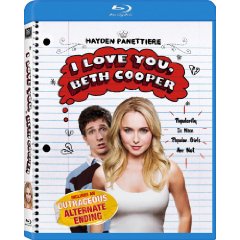 When Denis (Rust), the geekiest guy in high school, proclaims his love for super-popular Beth Cooper (Panettiere), during his valedictorian speech, everyone is…well… speechless! But the real shock comes that night when Beth shows up at Denis’ house with her two best friends to show him how the cool kids party.

It should come as no surprise, based on the movie trailer, that a high school brainiac confesses his true love to the prettiest cheerleader in high school during his valedictorian speech. During his initial speech, he makes an attempt of a joke that is intended to fall flat.

The rest of the movie is just that, though. When it DOES try to make a joke, it falls flat. Also, the rest of the movie plays out like a real high school geek’s dream of how things might turn out. The girl comes over with her friends (initially as a joke) and they all wind up getting caught up in crazy situations that is supposed to make the geek realize that there should be fun in your life when you’re young and to make the pretty young thing realize that there is more to love. It’s a movie that sincerely tries to show that it has a heart, but it truly doesn’t and even our main character doesn’t come across as wholly sympathetic either.
Movie Quality: 4/10

The print is presented in 1080p/AVC MPEG-4 with a 1.85:1 aspect ratio. The film is very colorful throughout the entire presentation with excellent details. Colors popped and were vibrant which resulted in a detailed image. There were a few scenes where the camera was panned out which gave that particular scene a lack of focus bringing the level of detail to a lower grade. There is some subtle hints of grain throughout the print.
Video Quality: 8/10

The audio is presented in DTS-HD MA lossless 5.1 mix. With ‘Beth Cooper’ being a comedy, is great for a film that is dialogue heavy with crisp and clean sound through the center channel. There isn’t much going on with the soundfield in terms of special effect, but the soundtrack helps fill the soundfield. I felt like the rear speakers didn’t get as much of a workout as they probably could have.
Audio Quality: 8/10

Sadly, it doesn’t play out realistically or comedically. It plays out more like a series of sketches with a “romantic teen comedy” somehow loosely stringing it together like wet pasta noodles restraining a felon. On Blu-ray this film has decent video and audio presentation which won’t knock your socks off. I would rent this before purchasing.
Overall Rating: 7/10