I Am Number Four Blu-ray Review

Three are dead. Who is Number four? From Director D.J. Caruso (Disturbia), producer Michael Bay (Transformers) and the Emmy-winning writers of TV’s Smallville, comes this gripping, action-packed thriller. John Smith (Alex Pettyfer) is an extraordinary teen masking his true identity to elude a deadly enemy sent to destroy him. Living with his guardian (Timothy Olyphant) in the small town he now calls home, John encounters unexpected life-changing events – his first love (Dianna Agron, TV’s Glee), powerful new abilities and a secret connection to the others who share his incredible destiny. Complete with deleted scenes and more, I Am Number Four is an explosive suspense-filled ride that will take you to the edge of your seat and beyond. 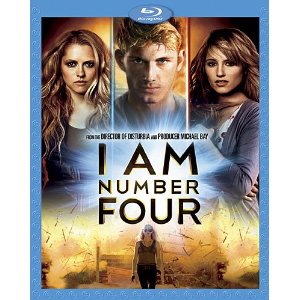 This is the entertainment business, and you know, they try, but probably the most entertaining thing about this movie was how it came to be. There are a lot of great films based on books, and even more great books deserving film adaptations, but rather than take a literary success and bring it to the big screen, Dreamworks decided to buy the rights to, of all things, I Am Number Four. Oh yeah, and they purchased them a year before it was even published! All because James Frey, author of A Million Little Pieces, decided to start a fiction franchise that pumps out books and movies that could be marketed to teens.

But hey, why not? It was bound to be a success. A young man escapes a planet just as it’s being destroyed, ending up in a quaint town in Kansas Ohio where he attempts to live a normal life, only to find that he possesses superpowers, which really throw a kink in his small-town romance. That exact story has already worked out once — why not a second time? All you need to do is get the creators of Smallville to write the script, toss in some beautiful people and a few Michael Bay explosions, and you’ve got yourself a hit.Although the whole first hour had me teetering on the edge of boredom, what’s scary is how much I actually ended up liking the movie, because, you see, the last 20 minutes kick so much ass! The action sequence is the only place you feel like Michael Bay was attached to this, and it shows.

Number Six (Teresa Palmer) arrives, and she’s this hot, sarcastic Aussie girl with wavy blonde hair who can kill the evil Mogadorians like nobody’s business and deliver one-liners right after. She slides on her knees, hamstringing baddies while Number Four deflects plasma gun blasts with his hands, shooting them back at his foes. Six can turn invisible and teleport and generate a fire shield and all this sick stuff. Which brings up the question, why is John’s main superpower the ability to turn his hands into flashlights? I mean, like, I guess that would be sort of useful, but I’d way rather be able to turn invisible. The movie has to find all these excuses to have the battles take place in dark places so that John’s power is useful, and it’s amusing to see how often they work it in.

Number Six was so cool that she saved the movie.The fact that she arrived at the end meant that I left feeling super stoked, which colored my whole experience with such a positive light that I couldn’t help but enjoy myself. I don’t know why she wasn’t in the movie the entire time. Having someone fun and sarcastic was exactly what the plot needed to keep it from taking itself, and the romance, way too seriously.
Movie Quality: 9/10

The print is presented in 1080p/AVC MPEG-4 with a 1:85:1 aspect ratio. The print looks very good throughout without any apparent issues. Colors are vibrant and carry pop which brings out the fine details. The detailed scenes stand out very well. Blacks are deep. I found the print to be crystal clear with no artifacts or print damage. The darker look and feel of the film looks great with the appropriate lighting making this film standout. The action doesn’t really start to pick up Michael Bay style till the end, but that is when this film really starts to shine in the visual department.
Print Quality: 7/10

The audio is presented in a DTS-HD MA l0ssless 5.1 mix. This is one film that takes complete advantage of the lossless sound mix. This is a demo worthy mix that could easily sell those on the fence about the format. The soundfield is immersive at all times no matter if it is the special effects or dialogue. I was literally amazed with the amount of bullets panning from each speaker in the rears. It sounded as if there were bullets ricocheting off of the walls in the room. Bass was punchy as it shows with the amount of gunfire and explosions. Dialogue is also well placed in the center channel sounding crisp and clear. The best part of this all around aggressive soundtrack is that it is well balanced between the dialogue and sound effects.
Print Quality: 9.5/10

I Am Number Four probably isn’t a good film at the end of the day, but it does have some good elements and will be mistakenly perceived as a good film because of them. If you’re a fan of explosive sci-fi action sequences, it is probably worth seeing for that reason alone. The film’s biggest downfall is that it’s rather confusing at times if you haven’t read the book and the film does a rather haphazard job of getting first time viewers up to speed.
Overall Rating: 7/10