Posted in DVD Reviews by George Theofanopoulos on 29 November 2010 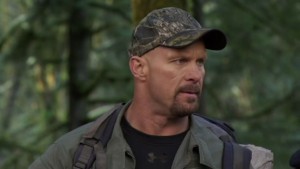 Faster than you can say “routine border patrol,” a meth lab investigation turns into a blazing catastrophe for officer Jim Rhodes (former pro wrestler “Stone Cold” Steve Austin, in fine burly form). Four years later, Rhodes finds himself and his daughter in the lush Montana backwoods, forced by crazed bank robbers to track down a traitor who stole their loot. Hunt to Kill opens with a lot of momentum; even if the material isn’t particularly original, the scenes move swiftly and establish the characters effectively. The movie loses steam once everyone’s clambering around in the woods, doing dumb self-defeating things and growing more and more cartoonish–including Rhodes, who only seems to stay alive by virtue of being the star of the movie. Still, Austin’s fans will enjoy watching him snap limbs and climb up rocky cliffs with his mix of ordinary-guy-ness and animal brutality. The footage of the Montana wilderness is beautiful, with gorgeous shots of mossy woods and frozen waterfalls. Also featuring Gil Bellows (Ally McBeal), Michael Hogan (Battlestar Galactica), and the ever-present Eric Roberts. 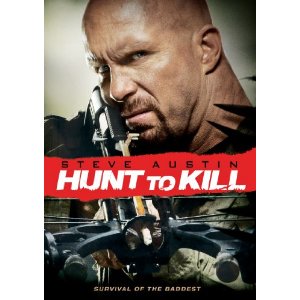 Austin plays a Border Patrol Agent named Jim Rhodes. After a bitter divorce that leaves him raising his teenage daughter Kim (Marie Avgeropoulis) alone and the brutal murder of his partner (Eric Roberts, picking up a check for a quick cameo), Rhodes accepts a promotion that finds him stationed in Northern Montana. But his quiet life in the woods is upset when a band of ruthless heist artists led by a sociopath named Banks roll into the neighborhood with a fortune in stolen bearer bonds. They take his daughter hostage, and coerce him into leading them through the wilderness and over the Canadian border. Of course, it isn’t long before there’s conflict and falling outs among the crooks, and the opportunity for a little random Rambo-styled mayhem on Stone Cold’s part.

“Hunt to Kill”, despite the blandly generic title and somewhat over-familiar plotline, is a terrific low-budget B-action film. Austin is surprisingly effective in the lead role, exhibiting some unexpected bits of human emotion along with the expected brute force. The cast is better than average for the genre, with Bellows turning in a fine, sly turn as the leader of the crooks, and British martial arts star Gary Daniels making a formidable physical opponent for the hulking Austin. Michael Hogan and Donnelly Rhodes appear in brief cameos.

The direction by Keoni Waxman is well-paced and engaging, and he makes good use of his cast and locations. The gorgeous, dangerous Canadian wilderness is captured in all its majesty by cinematographer Tom Harting and the score by Michael Plowman is excellent. The script isn’t particularly original, but there are a few good twists, a couple of interesting characters, some intentional humor, and plenty of action set-pieces.

The stuntwork is excellent, and the action is extremely well-shot and edited. The standout scene is the inevitable throw-down between Austin and Daniels, and when it finally occurs, it proves to be worth the wait. The fight is well-staged and clearly photographed, without the now-passe shaky camerawork, rapid editing and MATRIX-y computer crap that is usually employed to obscure bad choreography. No, this is a duel of mock-combat titans and truly a joy to behold.
Movie Content: 7/10

The movie’s main highlight is the strong supporting cast, especially Gil Bellows in the role of an incredibly nasty cartoon villain, which he hams up to perfection and is entirely believable as a serious match to the protagonist. The production’s weak points are the dialogue, which by and large is truly appalling throughout, and the musical soundtrack which is totally OTT and takes things altogether too seriously. Neither of those will deter the die-hard serious ass-kicking fan who can comfortably just sit back and watch the pretty explosions and sprays of blood.
Overall Rating: 6/10