Posted in DVD Reviews by George Theofanopoulos on 13 May 2011

Following in the footsteps of Planet Earth and Life, this epic eight-part blockbuster is a breathtaking celebration of the amazing, complex, profound and sometimes challenging relationship between humankind and nature. Humans are the ultimate animals – the most successful species on the planet. From the frozen Arctic to steamy rainforests, from tiny islands in vast oceans to parched deserts, people have found remarkable ways to adapt and survive. We’ve done this by harnessing our immense courage and ingenuity; learning to live with and utilize the other creatures with which we share these wild places. Human Planet weaves together eighty inspiring stories, many never told before, set to a globally-influenced soundtrack by award-winning composer Nitin Sawhney. Each episode focuses on a particular habitat and reveals how its people have created astonishing solutions in the face of extreme adversity. Finally we visit the urban jungle, where most of us now live, and discover why the connection between humanity and nature here is the most vital of all. 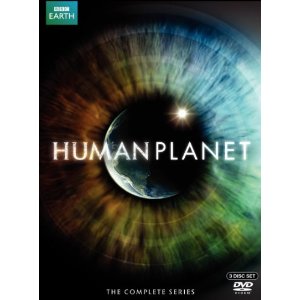 If you have seen the BBC’s superb previous flagship series ‘Life’, then I can summarize this as being the human version of that series by way of Planet Earth: A collection of exotic and sensational footage of humans, some living in various cities or villages around the world, but most of them at the fringes of civilization, all having to meet nature’s challenges using ingenuity, daring and downright unusual or dangerous solutions. This includes dealings with environmental dangers, human extents to find or hunt for food in the most extreme environments, various extreme forms of human dwellings and adaptations, and the many types of relationships between humans and animals ranging from exploitative, to practical survival tactics or pest-control, the religious, the conservationist, etc. The structure of these 8 episodes is modeled after Planet Earth, with a different terrain per episode: Oceans, deserts, the Arctic, jungles, mountains, grasslands, rivers and cities.

If you have seen some of the regional documentaries by the BBC such as Wild China, Wild Africa, South Pacific, Yellowstone, etc. then you have seen this kind of footage where the local humans and their unique adaptations to their environment are featured along with the indigenous wildlife. Except that this series focuses only on the humans, and manages to find some truly amazing footage, most of it new.

Frankly, I approached this series with skepticism, seeing as the series is about people rather than the relatively more surprising and exotic behaviour of wildlife. I also had a few apprehensions about their approach, and half-expected environmental preaching and a general attitude of ‘pure nature vs. evil humans’. But these concerns were allayed, and within 2 episodes I was hooked. Only the final episode ends on a thoughtful, environmentally-aware note while the rest of the series rejoices in human ingenuity and rich footage of human resourcefulness and unusual adaptations to their environments.

Some examples: Dangerous digging of a network of underground aqueducts in the Algerian deserts, building 35-meter-high tree-houses in the jungle with nothing but jungle materials and agile footing, lung-killing sulphur mining in Indonesian volcanos, a shepherd racing against elephants in Mali to reach a water-hole, Mongolian hunting using golden eagles, fishing on the edge of Victoria Falls, using falcons to keep skyscrapers clean, a dangerous long trek over thin ice in the Himalayas by children just to go to school, bedbug infestations in cities, tricky street-gangs of aggressive monkey thieves, stealing food from hungry lions, and much much more.

Which brings me to the violence. This time there is violence between humans and animals, most of it involving hunting. I can see this causing an uproar among animal lovers when this is released. But I think the BBC did a wonderful job of showing what is needed without sugar-coating or censoring reality and practical concerns often denied by animal lovers, and all this without exploiting or being gratuitous either. In addition, many of the hunts are performed by people that rely on it for basic survival, and they often involve dangerous stunts by the desperate hunters.

That said, some scenes are not appropriate for children. The gore of the hunts is often, but not always, minimized or off-camera, and there are scattered scenes such as the ritual drinking of blood from an animal in Africa, and some cataract surgery on mountain people that have gone blind from the sun, that parents would want to censor, not to mention the parental guidance needed on various daring stunts performed by carefree locals.

Finally, the structure: As mentioned above, each episode focuses on various extreme adaptations to a specific terrain and this gives the series a somewhat systematic framework. They thankfully got rid of the overview episode seen in previous releases and replaced it with a 10 second preview at the beginning of each episode, and they continued the trend of the ten-minute behind the scenes footage at the end of every episode which always adds some depth or human angle to the footage.

Just as Galapagos, Life and Planet Earth before it, Human Planet is a mosaic, a good one, but more depth would have been welcome. This is an intensely entertaining piece, but a tad shallow in the end.
Overall Rating: 9/10