Posted in DVD Reviews by George Theofanopoulos on 27 January 2009 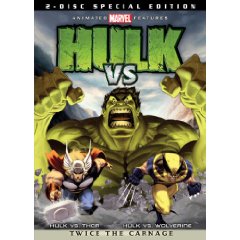 With a very successful box office return to theaters with last year’s ‘The Incredible Hulk’, Marvel Studios quickly went to work on a new animated feature film. This is a great opportunity for Marvel to also promote their upcoming films with ‘Wolverine’ and ‘Thor’ in 2009. While fans of the ‘Hulk’ will enjoy this 2-disc set as he wages battle against two an animal and a titan. Both stories are kept separate from each other with one disc concentrating on Hulk vs. Wolverine on disc one and Hulk vs. Thor on disc two. This should make fans of the ‘Hulk’ very excited to see not one, but two new adventures.

‘Hulk vs. Wolverine’ is 35 minutes in length and focuses Wolverine looking for the Hulk in a forest. Hulk has gone crazy as he is running through the forest causing all kinds of chaos as he nears another city that he will cause destruction to. The government has recruited Wolverine to find the Hulk and stop him. If he can’t be stopped, his orders are to execute the big green goliath. What happens next is that Wolverine meets Bruce Banner, but he angers him causing the Hulk to make an appearance.

We quickly find out that the Hulk is not behind this path of destruction. That claim lies with Sabretooth, Deadpool, Omega Red, and Lady Deathstrike. It turns into both Hulk and Wolverine taking on the villains that have in a sense setup the Hulk for this mess. The battles are entertaining and very well done with some good animations. This episode was clearly my favorite of the two, but a tad bit short. If this was given about another 30 minutes to buildup the story and to delve more into the characters it would have greatly helped. 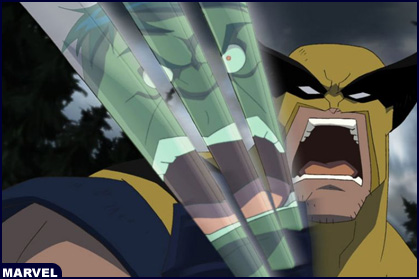 ‘Hulk vs. Thor’ is 45 minutes in length adding another 10 minutes over the first feature film. The story in this film revolves around Loki controlling the Hulk to battle Thor. For those that are unfamiliar with Thor, he and Loki are stepbrothers that do not see eye to eye. Loki will use the big green machine as his own menace to defeat his brother. Hulk even has some hair in this episode.

I didn’t enjoy this second feature film as I did the first albeit being 10 minutes longer. The animated battles are really cool and interesting, but nothing that stands out after you are done viewing. I would almost consider this one as a bonus disc to this set with the Wolverine disc being the highlight.
Movie Content: 4/5

This is a nice new addition to expanding the ‘Hulk’ universe on television; there are a few areas with the ‘Hulk vs. Thor’ disc that could have been better. There are a plethora of extras which will make any fan of the Hulk very excited. This is a nice 2-disc release for the fans as they will chew this up in a heartbeat. Marvel Studios went in with the thought of their specific target audience.
Overall Rating: 4/5 (Purchase for fans)