How To Lost A Guy in 10 Days Blu-ray Review 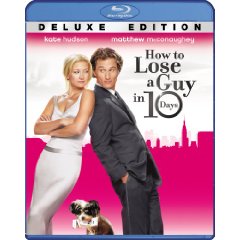 Kate Hudson twinkles as the heroine of How to Lose a Guy in 10 Days, a magazine writer assigned to date a guy, make all the mistakes girls make that drive guys away (being clingy, talking in baby-talk, etc.), and record the process like a sociological experiment. However, the guy she picks–rangy Matthew McConaughey–is an advertising executive who’s just bet that he can make a woman fall in love with him in ten days; if he succeeds, he’ll win a huge account that will make his career. The set-up is completely absurd, but the collision of their efforts to woo and repel creates some pretty funny scenes. McConaughey’s easy charm and Hudson’s lightweight impishness play well together and the plot, though strictly Hollywood formula, chugs along efficiently. At moments Hudson seems to channel her mother, Goldie Hawn, to slightly unnerving effect.

Kate Hudson works for a fashion magazine, and as research for her column she has agreed to hook a man and then drive him away in 10 days by making the common ‘mistakes’ that many women make in dating. Unbeknownst to her, the man she gets is Matthew McConaughey, an ad exec who has been challenged by his boss and competitors at work to make a woman fall in love with him in 10 days or less. See? One wants to wreck it at all costs, one wants to save it at all costs. The wackiness is supposed to ensue.

This type of set-up forces two very amiable stars to behave like nitwits for the entire film. By the time they inevitably discover that each was deceiving the other, you haven’t developed any sympathy for either character. You don’t care if they get past it and end up together. If just one was deceiving the other, you’d have a place to make your emotional connection to what’s happening, and it doesn’t even necessarily preclude you from ending up liking the deceiver (especially if he or she is being deceptive for reasons beyond their control). Here, however, they’re both being extraordinary callous about the feelings of another human being, for pretty flimsy reasons. After awhile, rather than sucking you in, it just starts to aggravate you.
Movie Quality: 6/10

The print is presented in 1080p/AVC MPEG-4 with a 2.35:1 aspect ratio. he transfer looks good, but nothing that you will scream as the best quality transfer. Colors are vibrant with deep blacks. Details are very strong. There is some subtle grain throughout the film. This is one of the better transfers that I have seen for a catalogue title.
Video Quality: 8.5/10

The audio is presented in Dolby TrueHD 5.1 mix. This is a more dialogue driven film with excellent audio for the premise of the film. With this being a romantic comedy, there are no action sequences, so don’t come in expecting a bombastic mix. Dialogue is very clean and crisp through the center channel. We have more of a front heavy experience with the mix as dialogue also tends to pan between the front speakers. When the rears get are in use, you hear a few sound effects and the score.
Audio Quality: 8/10

‘How To Lose A Guy in 10 Days’ is an entertaining popcorn film that has been done multiple times before. On Blu-ray, the film looks and sounds good which fans of the film will not be disappointed.
Overall Rating: 7/10