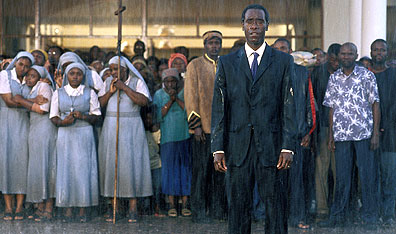 Solidly built around a subtle yet commanding performance by Don Cheadle, Hotel Rwanda emerged as one of the most highly-praised dramas of 2004. In a role that demands his quietly riveting presence in nearly every scene, Cheadle plays real-life hero Paul Rusesabagina, a hotel manager in the Rwandan capital of Kigali who in 1994 saved 1,200 Rwandan “guests” from certain death during the genocidal clash between tribal Hutus, who slaughtered a million victims, and the horrified Tutsis, who found safe haven or died. Giving his best performance since his breakthrough role in Devil in a Blue Dress, Cheadle plays Rusesabagina as he really was during the ensuing chaos: “an expert in situational ethics” (as described by critic Roger Ebert), doing what he morally had to do, at great risk and potential sacrifice, with an understanding that wartime negotiations are largely a game of subterfuge, cooperation, and clever bribery. Aided by a United Nations official (Nick Nolte), he worked a saintly miracle, and director Terry George (Some Mother’s Son) brings formidable social conscience to bear on a true story you won’t soon forget. 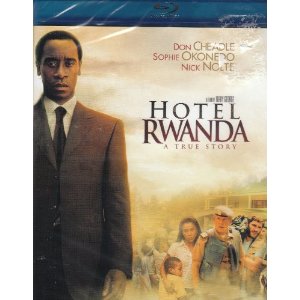 Don Cheadle, as Paul Ruseasabagina, the Rwandan Manager of a 4-star hotel which serves as a haven for Europeans and African Elites, gives a performance that is at once measured, controlled and deeply anguished. As a fact-based but fictionalized account, “Hotel Rwanda” captures the horror and absolute madness of racially-based war that had its origins in European colonialization when the Germans (and later the Belgians, to much more devastating effect) exalted the Tutsis (for the their more “European” physical characteristics) as the prominent ruling class over the Hutus. The ebb and flow of decades-long resentments finally came to a head in 1994, when close to a million Tutsis were felled in a horrific blood-bath–and all in the face of European and American indifference.

Cheadle’s Ruseasabagina (a Hutu who is married to a Tutsi, played by Sophie Okonedo )first shows an unremarkable decency that ascends to heroic proportions as he risks the lives of himself and family, attempting to shield and help well over 1200 people–first by crowding them into his Hotel, a temporary “safe house” and then by bartering transportation away from the encroaching Hutu militia. The film’s intensity is heightened by the fact that many surviving Rwandan refugees from that era were recruited as extras–essentially reliving, in a sense, a most horrendous nightmare.

The movie also benefits enormously from provocative performances given by Sophie Okonedo (as Tatiana, his long-suffering wife); Nick Nolte who, as the near-ineffectual commander of UN peacekeepers, gets across the utter shame and disgust felt by many who were essentially powerless to stop the massacre; and Joaquin Phoenix in a bit part as a randy reporter who has an affair with a local Tutsi and then abandons her as casually as one would an anonymous call girl.

The print is presented in 1080p/AVC MPEG-4 with a 2:35:1 aspect ratio. ‘Hotel Rwanda’ right next to ‘Dead Man Walking’ sports one of the better transfers. Colors are strong and accurate throughout just looking very natural. Blacks are deep. There is a fine layer of grain. Details and clarity are both great and really helps with this 1080p transfer for larger screen viewings. If you already own this on DVD, and are a fan of the film upgrading to the Blu-ray version would be recommended.
Print Quality: 9/10

The audio is presented in a DTS-HD MA l0ssless 5.1 mix. This is an intense and complex audio experience you will not be disappointed. I always felt like there was something going on in the soundfield. It is done so well that you feel as a part of the experience. Dialogue is clear and crisp through the center channel with no apparent issues.
Print Quality: 9/10

While the film industry comes under constant scrutiny for the choice and decisions of the films they make, “The Hotel Rwanda” serves as a haunting reminder of the genocide that went barely undetected. Where is Rwanda today? Nobody seems to ask, care or know. I urge viewers to see “The Hotel Rwanda”. It is that good, and more.
Overall Rating: 8/10