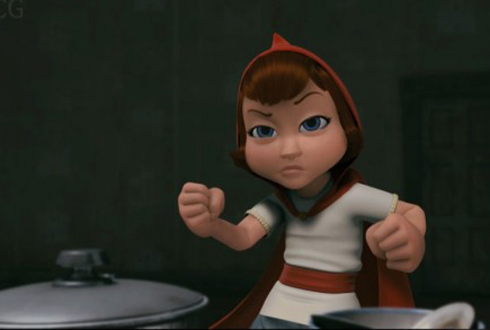 The good… the bad… the Twitchy. The sequel finds our heroine, Red (Hayden Panettiere), training with a mysterious covert group called the Sisters of the Hood. But Red is forced to cut her training short when she gets an urgent call from Nicky Flippers (David Ogden Stiers), the head of the super secret Happily Ever After Agency, aka the HEA. A wicked witch (Joan Cusack) has abducted two innocent children, Hansel (Bill Hader) and Gretel (Amy Poehler), and Nicky needs the whole Hoodwinked gang — Red, Granny (Glenn Close), the ever-clueless Wolf (Patrick Warburton) and his over-caffeinated little partner, Twitchy (Cory Edwards) — for the search and rescue mission. 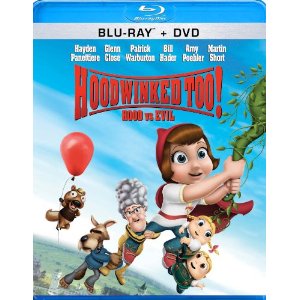 While the original “Hoodwinked” might not be my favorite movie of skewed fairy tales (that place in my heart belongs to Shrek), it was a clever colliding of movie styles. With four character narratives intersecting and intertwining, the film played as an amusing riff on “Rashomon” and even “Pulp Fiction” for the animated set. It was a bit uneven, but it worked largely by pushing the boundaries with a great concept. Eschewing the charm and most of the laughs of its predecessor, the 3-D sequel “Hoodwinked Too!” arrives in an impressive DVD package. However, the film itself is all concept and no heart. But what’s worse–it boasts a terrific cast of comedic vocal talent, but lacks a real sense of humor. I wanted to like this movie, truly I did, but ultimately I just didn’t care about the characters.

Sequels are sometimes good, but most times not. This sequel is terrible. I just bought the original “Hoodwinked” because I loved it and have seen it at least 3 or 4 times. I have recommended it to many people. When part “Too” came out, I saw it in the theater, I was so excited about it. Man, was I blow away by how poor it was. All the ineresting angles and approach of the original was gone… it was just another animated kids movie with straight-forward, predictable plot. I recall chuckling a couple times… that is it.

I highly recommend you go buy the original Hoodwinked… you will be happy you did. (Just try to resist the temptation to follow up the watching of that great movie with watching this sequel.).
Movie Quality: 6/10

The print is presented in 1080p/AVC MPEG-4 with a 2:40:1 aspect ratio. ‘Hoodwinked: Too’ is a really colorful movie and the characters are really smooth looking. The image is image is unbelievably clear and super sharp. The colors pop off of the screen for even an older animation, it brings out the details in the animation. Some good examples of fine details, look at the foilage, you can see the lush environments. Animations have been looking so wonderful on Blu-ray and this film is no exception.
Print Quality: 9.5/10

The audio is presented in a DTS-HD MA l0ssless 5.1 mix. The sound is rather impressive in ‘Hoodwinked: Too’ and this I wasn’t even expecting going in. It takes advantage of the soundfield with the rears actually getting a good workout with the soundtrack and effects. The sound from the fight scenes is also well done. Dialogue is well placed through the center channel with voices being so ever clear.
Print Quality: 9/10

Glenn Close (Granny), Patrick Warburton (Wolf) and David Ogden Stiers (Detective Flippers) repeat their voice roles from the original, while Hayden Panettiere takes over from Ann Hathaway as Red and Martin Short replaces Jim Belushi as the Woodsman. Other voice talents in this one include Bill Hader (Hansel), Amy Poehler (Gretel) and Joan Cusack as the witch. If you are a fan of the original you might want to give this one a rent before buying.
Overall Rating: 7/10