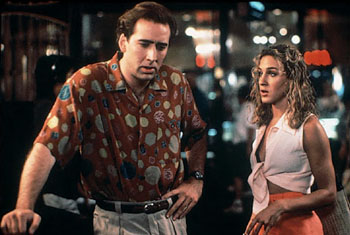 Writer-director Andrew Bergman is capable of funny, funny stuff, but this movie runs out of jokes long before it runs out of comic ideas. The result is a series of comedy concepts that never get past the one-liner stage and are distinctly unsatisfying. Still, there is plenty to be amused by in this story of a reluctant bridegroom (Nicolas Cage) who finally agrees to marriage, only to lose his fiancée (Sarah Jessica Parker) in a crooked poker game to a professional gambler (James Caan). The rest of the movie deals with his frantic attempt to get his fiancée back, while coping with a Vegas in the throes of an Elvis-impersonator convention. That’s the funniest thing about the whole movie (most notably the team of parachuting Elvises at the end), but even that is drawn out in ways that are more clever than laughter inducing.

`Honeymoon in Vegas’ is pretty much the comedic equivalent to `An Indecent Proposal’, which is sad because `An Indecent Proposal’ is a much better drama than `Honeymoon in Vegas’ is a comedy. I’m really not a fan of Nicholas Cage, not in the least. I enjoyed him twice that I can recall (in `Adaptation’ and `Matchstick Men’) but aside from those two fluke performances I’m always left cold by his horrid line reading. In fact I’m willing to say that his spastic performance in this comedy could very well be his worst ever. He happens to be one of those actor’s who thinks if he screams his lines they’ll grab a hint of hilarity, but they don’t and he comes off ridiculous, especially when paired next to Sarah Jessica Parker and James Caan who work with what little they’re given with much greater success than Cage.

In the film Cage plays Jack Singer, a man afraid to commit. He travels to Vegas with his girlfriend Betsy, played by Parker, to finally tie the knot but before he can he finds himself in a high stakes poker game with a mobster named Tommy Korman. Tommy, who has his eye on Betsy, ends up taking Jack for $65,000, money that Jack doesn’t have, but in turn offers him a resolution. If Jack will lend Tommy his fiancé for the weekend then his debt will be erased. Betsy reluctantly agrees only to find out that her weekend will not be spent in Vegas but in Hawaii with Tommy and his family (son and daughter-in-law and his new granddaughter). It’s in this tropical paradise that Tommy begins to woo Betsy for himself while Jack frantically tries to find her and win her back.

Parts of this film are funny, in particular the `Flying Elvis’s’ at the end of the film are delightful, but almost every scene involving Cage is dreadful. Sarah Jessica Parker does a nice job of playing the fed up girlfriend who can’t make up her mind who or what she believes, but it’s Caan who steals the show in my opinion. He’s always been a great actor, and not much has changed since his glory days. He’s still on top of his game and acts circles around the rest of the cast.
Movie Quality: 7/10

The print is presented in 1080p/AVC MPEG-4 with a 1:85:1 aspect ratio. This has to be one of the most weirdest transfers I have seen in a long time. There are times where the print looks good, other times where it has excessive DNR used, and other times where the grain just looks out of hand. It is one of those prints where you are left wondering did they remaster certain parts of the print and not others. Colors are rather soft throughout the film and even worse is that there is a lack in details. If you are a fan of this film, you will want to pick it up on Blu-ray but I felt disappointed by the print quality.
Print Quality: 6.5/10

The audio is presented in a DTS-HD Master Audio 2.0 mix. With this film being dialogue centric do not expect your soundfield to be booming throughout the entire film. Dialogue comes through the center channel very clear and crisp. I am a bit baffled as to why they didn’t go with a full 5.1 mix here as the soundtrack warrants it.
Print Quality: 6/10

This film has its moments, and the Elvis impersonator/parachuters late in the movie are sort of funny, but overall it’s sort of a poor man’s An Indecent Proposal with Robert Redford, Woody Harrelson, and Demi Moore, but with a slightly different premise. As I said, it occasionally has its moments, but all in all there’s not a whole lot to distinguish the movie.
Overall Rating: 7/10