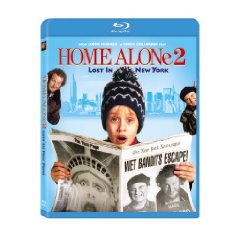 Kevin McCallister (Macaulay Culkin) is back! But this time he’s in New York City with enough cash and credit cards to turn the Big Apple into his own playground! But Kevin won’t be alone for long. The notorious Wet Bandits, Harry and Marv (Joe Pesci and Daniel Stern), still smarting from their last encounter with Kevin, are bound for New York too, plotting a huge holiday heist. Kevin’s ready to welcome them with a battery of booby traps the bumbling bandits will never forget!

The film is different in that Kevin actually isn’t home alone so to speak. He makes it to the airport for the family’s Florida vacation. However, it’s the wrong plane he boards. Kevin winds up in New York. Nervous at first, he realizes he brought his dad’s luggage with him, and buys his way through Manhattan with his credit card, including an ill fated stay at the plaza hotel. (I find it interesting since I too had an unpleasant stay at the plaza last year, when they lost my only luggage, which was filled with thousands of dollars worth of cds). However, Marv (Daniel Stern) and Harry (Joe Pesci) are back on the streets, also in New York, and soon run into Kevin. You can basically tell what happens in here.

Overall, this film is very good. The warm holiday feeling the first one had. In fact, this film is darker than the first one. One good example is the confrontation at the abandoned house with Marv and Harry. It is much more violent than the first one. Marv is nearly killed when he gets electrocuted. How’s that for a family film? Plus, there is one rather disturbing sequence where Kevin is nerrvous because he’s alone in the dead of night and meets to really seedy and weird hookers. Then he gets into a cab with a really spooky driver. This may actually frighten the younger fans of the first film. Another sticking point is that I never got into Brenda Fricker’s pigeon character (this film’s version of the much more enjoyable shovel character from the first film).
Movie Quality: 7/10

The print is presented in 1080p/AVC MPEG-4 with a 1.85:1 aspect ratio. This releases fairs a bit better than the original on Blu-ray in terms of picture quality. Colors are washed out throughout the film. Blacks are also soft which hurts the print a tad bit. Details are also fairly good even though colors and blacks don’t jump off of the screen. Grain is very subtle throughout the entire print. I can not complain here as the film on Blu-ray looks better than the last two DVD releases.
Video Quality: 7.5/10

The audio is presented in DTS-HD MA lossless 5.1 mix. The audio experience is actually fairly pleasant for a film that is more about the dialogue. The film’s soundtrack does take advantage of the rears in the soundfield. The score is done by John Williams, better known for the ‘Star Wars’ score. The soundfield also takes well advantage of special effects. It brings the special effects to life much more than any of the DVD versions ever did. Dialogue comes through the center very clear with no apparent issues.
Audio Quality: 8/10

However, there are some strong qualities. Catherine O’Hara turns in another strong performance as Kevin’s put – upon mother, while the small roles by Donald O’Connor, Tim Curry, Rob Schneider and Donald Trump liven things up. This is nowhere near as good as part one, but definitely worth it. If you are a fan of this film I recommend picking up this blu-ray and adding it to your collection.
Overall Rating: 7/10