Posted in DVD Reviews by George Theofanopoulos on 28 April 2011 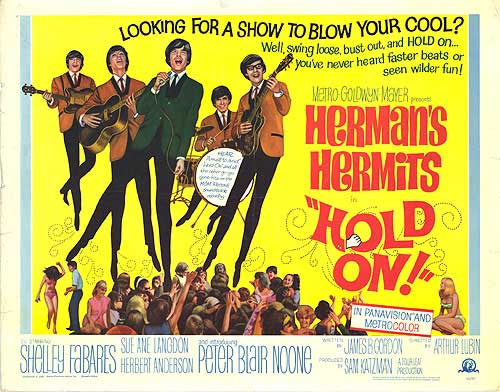 The career of the British Invasion pop group Herman’s Hermits was in full, fan-shrieking, disc-selling orbit when their first top-billed movie came to theaters, so maybe it’s only natural to think NASA would want to name a rocket after them. Well, at least that’s what’s at stake in this 1966 romp that has the five lads on a U.S. tour, where they’re mobbed by various birds – and secretly monitored by a nerdy scientist to determine if they are rocket worthy. Yes, Hold On! is not so much about making sense as it is about having fun. A double fistful of Hermits’ songs (including the Top 10 hits “A Must to Avoid” and “Leaning on the Lamp Post”) adds to the good times. Shelley Fabares, no stranger to the charts with 1962’s Johnny Angel, costars. 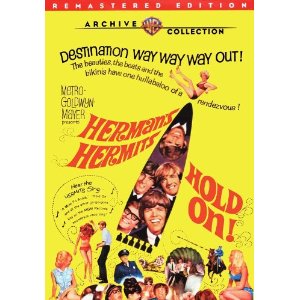 Somebody, somewhere, in 1966, got the idea to make a movie featuring the English rock-n-roll band Herman’s Hermits. That somebody should be interrogated at length. This movie was obviously a crass attempt to cash in on the evolving music phenomena of Merseybeat and its earth-shaking success, “Beatlemania.” The curious thing is that the music of Herman’s Hermits was certainly unique, then, and remains enjoyable now. Imagine hearing rock-n-roll music that actually has melodic structure, played by young men with no residue of anger or ‘angst.’ Imagine that.

The plot is tissue paper thin. In fact, it is as if the script was written with invisible ink. The whole “we’re gonna get a rocket named after us” theme is just plain … screwball. It would be nice if the comedic elements in this movie could be called “screwball.” But that isn’t really what’s going on here ….

In 1966 there were no “infomercials” on television. That was a concept dreamed up later, when independent TV stations and then cable networks found that they had time they could sell for these thirty-minute repeatable information commercials. However, “Hold On” seems to double as an extended commercial for the band.

So there’s the story of this movie: “Hold On” seems to have been cloned from a “beach blanket bingo” template, being as it is set in California and there’s just oodles of opportunities for pretty young things to cavort in the bikini suits of the day. How clever. Being a fan of the music of the 1960’s, I found this ‘confection’ to be very pleasing, even if overloaded with sugar and syrup.

Merseybeat and the “English invasion” of the 1960s was most assuredly an epochal event in the musical culture of the United States, and what is so strange, is that both the Beatles, the Rolling Stones, the Yardbirds and some other amazingly successful bands of that time began by listening to American music, ‘rhythm & blues,’ to be specific, and reinterpreted some of the great popular music of that genre into what later came to be called “Blue-eyed Soul.” It remains one of the great mysteries of sociology as to why Merseybeat and the English invasion was so perfectly right for American pop culture in those years after the assassination of John F. Kennedy and before the turmoil caused by the Viet Nam conflict. But then, there were many mysteries abounding in the 1960s.

The aging fans of Herman’s Hermits will remember Hold On! with nostalgia. What the film does lack is any of the identifiable songs from the boys back in the day. The score is hardly that of A Hard Day’s Night or even Help!. But the film is a pleasant enough diversion and I don’t think those who watch it are expecting too much.
Overall Rating: 6/10