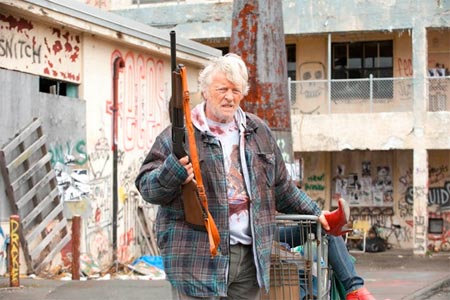 A train pulls into the station it’s the end of the line. A hobo jumps from a freight car hoping for a fresh start in a new city. Instead, he finds himself trapped in an urban hell. This is a world where criminals rule the streets and Drake, the city’s crime boss, reigns supreme alongside his sadistic murderous sons, Slick & Ivan. Amidst the chaos, the hobo comes across a pawn shop window displaying a secondhand lawn mower. He dreams of making the city a beautiful place and starting a new life for himself. But as the brutality continues to rage around him, he notices a shotgun hanging above the lawn mower… Quickly, he realizes the only way to make a difference in this town is with that gun in his hand and two shells in its chamber.

This is a not a good film in any sense. But it is a good film within its genre. Its pure violent pulp exploitation with no pretensions and in many respects its the purity of the concept which elevates it to something more than it would otherwise be. Its kind of like the old Sergio Leone westerns or something like the original Beastmaster or Road House or the first Boondock Saints.

The film had its start as a phony trailer in an earlier bigger film. The trailer was a funny two-minute joke. But they managed to make it work for real as a film.

A nameless hobo gets off a train in a new town with dreams of buying a lawnmower to start a business. But the streets are out of control and the hobo is forced to clean up the town on his own. The town is run by a violent goof named “Drake” and his two sons…one of whom looks like he stepped out of old Tom Cruise film like Risky Business. The villians are really easy to hate. The hobo is a no-nonsense hero.

The film is slightly different than the old “Death Wish” formula because there is a clear wealth and class subtext to it. Most vigilante films feature middle class or rich victims taking revenge on psychotic criminals. But “Hobo” is about a man at the very bottom taking revenge on a corrupt system run by the wealthy and powerful who exist beyond the reach of any law. Going after the “bumfights” guy, going after the rich goof (Drake) and going after the idiot sons of the rich goof are all powerful concepts.

And like all exploitation films, we get things that just don’t make a bit of sense. Two Junior Iron men eventually show up with no particular explaination. But its so goofy, it works. If you are a fan of Grindhouse this is highly recommended.
Movie Quality: 9.5/10

The print is presented in 1080p/AVC MPEG-4 with a 2:40:1 aspect ratio. For those going into this film for the first time, the dirt, print damage, grain, and all kinds of imperfections to the print are intentional. This is to be perceived as a low budget Grindhouse feature film. Colors look exceptionally well and strong despite the intentional print damage. Fleshtones look very good and natural. Blacks are deep. With all these areas of the print being rather strong, it allows for a nicely detailed print. With the film having a bunch of digital work done to it to give it this look and feel, details look good up close and in panned away shots..
Print Quality: 9/10

The audio is presented in a DTS-HD MA l0ssless 5.1 mix. This is one atmospheric audio experience from start to finish. The rears almost always have some kind of effects. I felt like I was at the center of the action in many of the sequences with bullets whizzing by behind me. Bass is also on the low end of the spectrum, and it sounds so good. It adds that extra oomph to scenes with guns blazing, vehicles, and the ongoing chaos. The soundtrack/score is also excellent setting the tone in many scenes. Dialogue is very good through the center channel.
Print Quality: 9.5/10

Really liked this movie and recommended for fans of Grindhouse. Yes it’s violent and over the top, but hey, this is grindhouse. The characters are wonderful and almost every one is iconic in their own right. The movie makers created a gritty world with strange and twisted people mostly committing vile acts.
Overall Rating: 9/10