History of the World Part I Blu-ray Review

Mel Brooks’s 1981, three-part comedy–set in the Stone Age, the Roman Empire, and the French Revolution–is pure guilty pleasure. Narrated by Orson Welles and featuring a lot of famous faces in guest appearances (beyond the official cast), the film opens well with Sid Caesar playing a caveman, then moves along to the unlikely but somehow hilarious juxtaposition of Caesar’s soldiers (the other Caesar, not Sid) with pot humor, and ends on a dumb-funny note in the French bloodbath. This is a take-it-or-leave-it movie, and it works best if you’re in a take-it-or-leave-it mood. 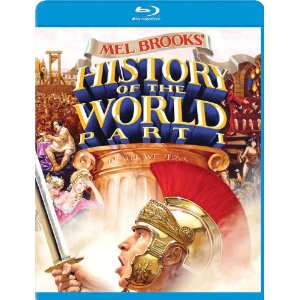 More so than the longer stories in Rome and France, the quickie jokes with Moses, the Cavemen, Jesus, and the Inquisition are the funniest parts of this film. A few jokes in the script are more dated now but most hold up very well still! This is one of most hilarious takes on history since “Monty Python and the Search for the Holy Grail” but it goes over several different periods of time when each short could have been made into its own full-length feature.

Mel himself takes on several roles as Moses, a stand-up philosopher in Rome, the leader of the Spanish Inquisition, and double roles as the king of France and the piss boy in one story. He never takes on an accent but he doesn’t have to. He sets up silly situations and comparisons to modern times and is never afraid to just go there and feels the more ridiculous, the better.

Unfortunately “History of the World: Part 2” advertised at the end was never made into a film though I know we’d all like to see Hitler on Ice and Jews in Space!.
Movie Content: 10/10

The print is presented in 1080p/MPEG-4 with a 2.35:1 aspect ratio. This is yet another Mel Brooks film on Blu-ray that has received the high definition treatment and looks great. This is the same disc that was offered as a part of the Mel Brooks Collection released last December. The film is nearly 30 years old and does show its age in high definition, yet looks very good. Colors are strong with yellows and golds taking center stage. Fleshtones look accurate and natural. Black levels are deep. I didn’t notice any print damage or artifacts due to the age of the film. Details are prominent throughout showing more clarity than we have ever seen for this film. Mel Brooks fans will not be disappointed with this film’s release on Blu-ray.
Video Quality: 9/10

The audio is presented in DTS-HD MA lossless 5.1 mix. This is more of a dialogue driven film due to the comedic nature. I was quite impressed with the depth of the dialogue coming through the center channel. Dialogue was clean and clear with no apparent issues. This film has some decent usage of the rears with soundtrack and special effects, but this is still more of a front heavy experience.
Audio Quality: 8.5/10

I am a huge fan of Mel Brooks films and this is one of his best and in my top 5 comedies of all-time. If you have not experienced Mel Brooks comedies, this is one that I highly recommend. On Blu-ray I was rather impressed with how well the film turned out for its age. I did feel underwhelmed by the lack of special features for this release which is a shame.
Overall Rating: 7.5/10