Japan’s Hiromi Kanda doesn’t just sing the standards, she embodies them. On her new album, Hiromi in Love, and the sensational videos that accompany the recordings, the Japanese vocalist transforms each classic into a work of art. With an elegant visual style that matches the grandeur of the songs timeless Great American Songbook gems such as “That Old Feeling” “My Funny Valentine” and “Someone to Watch Over Me” Hiromi places this music back into the context in which it was created while breathing new life into it. And it’s all a labor of love. 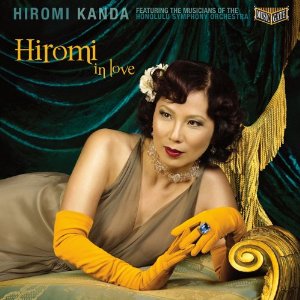 Japanese singer Hiromi Kanda expresses her affection for American pre-rock traditional pop music on Hiromi in Love. She is accompanied by members of the Honolulu Symphony Orchestra, playing arrangements written and conducted by Matt Catingub (who also contributes alto saxophone, piano, and backup vocals) on a set of standards written by the likes of Irving Berlin, the Gershwins, and Rodgers & Hart, plus a couple of originals in a similar style. Her timbre may remind some listeners of Linda Ronstadt, who made three albums of similar music, though native English speakers probably will feel the same way about Kanda that native Spanish speakers did listening to Ronstadt’s albums of Mexican music, in the sense that Kanda sings with a slight Japanese accent throughout.

For this Blu-ray which covers 11 of her songs, she’s backed by members of the Honolulu Symphony Orchestra. While they don’t have the bling power as musicians from the Cleveland, San Francisco or Boston Symphony Orchestras, they sound first-rate. Among the standouts are “That Old Feeling, “Someone to Watch Over Me,” and “How Deep Is the Ocean.”

The few originals, with Kanda receiving credit for co-writing lyrics, “Always Here For You” and “Blue Love,” prove that she can branch out on her own. They aren’t going to challenge the classics for “best songs” on the album, but they’re serviceable and don’t negatively stick out to the point where you’re reaching for the remote. Hiromi is Love is really nothing more than a collection of 11 music videos which will make fans very happy.
Movie Content: 7/10

Some may find her accent distracting at times. It is most pronounced on “My Funny Valentine” and “Unforgettable.” But it’s actually quite disarming and adds to the overall charm of the album.
Overall Rating: 7/10