Posted in DVD Reviews by George Theofanopoulos on 12 April 2011 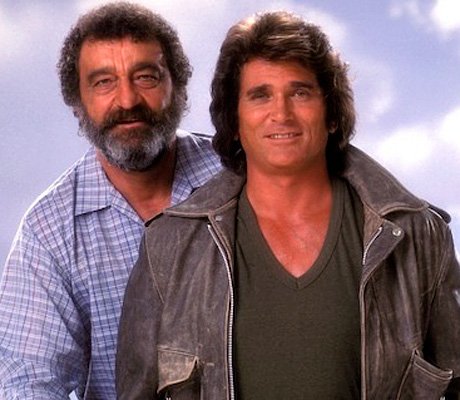 The premiere season of Michael Landon’s Highway to Heaven is consolidated into this collector’s edition box set of seven discs containing 24 episodes of faith and love. The television series (1984-1989) has a loyal following because of its compelling storylines and uplifting messages characteristic of Landon, an icon of family-friendly entertainment since the early days of Little House on the Prairie and Bonanza. An angel on assignment from God is disguised as “everyman” Jonathan Smith in order to comfort–and sometimes miraculously guide–the lost and suffering through various dilemmas. Smith and his earthly cohort, ex-cop Mark Gordon (Victor French), journey across country to work as horse trainers, bellhops, baby-sitters–whatever the task requires. The collection leads with the two-part pilot episode that establishes Smith and Gordon’s friendship. Other highlights of the collection include the two-part “Thoroughbreds” with guest star Helen Hunt as a woman who learns to risk love while battling cancer; and “Help Wanted: Angel” where Gordon is cast in a movie and falls in love with the leading lady. Especially poignant is a bonus documentary, “Michael Landon: Memories with Laughter and Love,” a tribute to the prolific star including film clips and reminiscences by family members. 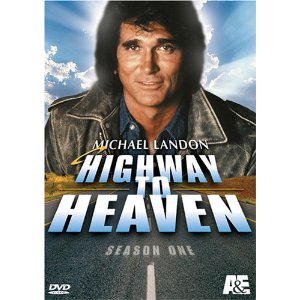 “Highway to Heaven” is one of my all-time favorite television programs so I was pleased to learn about the DVD release of Season One. Michael Landon and Victor French shared a great friendship as Jonathan and Mark and their scenes together are priceless. It’s too bad that many of them have been cut from this collection as these are the syndicated episodes of “Highway to Heaven”.

When they aired on NBC-TV, the episode “Going Home, Going Home” was approximately two minutes longer than its DVD counterpart; “Another Song for Christmas” was approximately three minutes longer. Think about this: If each show is missing between two to three minutes and you multiply this by the season total of 24 episodes, you get the equivalent of one missing hour of programming! And for the most part, the scenes dropped are those memorable buddy moments between Jonathan and Mark.

The syndicated episodes of “Highway to Heaven” closed with a tag for Genesis Entertainment. On the back cover of the DVD box is a logo for Genesis International. It would seem, presumably, that these are the same entity.

Michael Landon’s work was the best thing that ever happened to television and it should also be the best thing that ever happened to TV on DVD. Perhaps the powers that be will release a COMPLETE season two with a bonus feature containing all the missing scenes from season one. Now that’s a collection that would earn FIVE stars! I’ll be waiting for it!
Movie Quality: 9/10

I remember enjoying watching this TV show as a teenager. It’s a breath of fresh air, as it doesn’t focus on murder, rape, and other darkness that a lot of TV shows focus on today. It’s an inspirational TV show about learning in life and gives people hope.
Overall Rating: 8/10