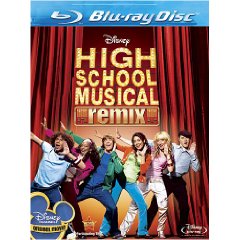 The power of music explodes like never before in this spectacular Blu-ray Disc Remix Edition of the Emmy Award-winning HIGH SCHOOL MUSICAL! The smash hit Disney Channel Original Movie now features theater quality sound, the best picture available, and awesome bonus features that will rock your world. Get a prime spot on the red carpet for the star studded Hollywood premiere, and join the High School Reunion where the cast reunites in an exclusive interview to share how the movie phenomenon has changed their lives. Plus, stand up and experience the Dance Along, in which Troy, Gabriella, Sharpay and Ryan give step by step instructions to popular dance sequences Get’cha Head In The Game and We’re All In This Together. Hear two exclusive remixed versions of your favorite songs and watch three new music videos. In pristine picture, sound and quality only Blu-ray can deliver, this HIGH SCHOOL MUSICAL REMIX EDITION is bigger, bolder and more rockin’ than ever!

In what I like to call pop culture phenomenon, ‘High School Musical’ managed to become Disney Channel’s highest rating television show to ever grace the network. With a total of 7.7 million viewers to watch the movie on its debut, I am astonished. Then add how many times the film was re-aired on Disney Channel and then when it came to home video, sales skyrocketed. The well oiled marketing machine at Disney has been steam rolling with this franchise producing 2 sequels, confirmation that a fourth film is in production, marketing through the roof, and tons of merchandise that could be purchased by fans.

I am a bit surprised that this made for television feature film would become ever so popular instantaneously. Disney made the wise decision to capitalize on the films success making all of the actors of the film even bigger stars. I think this little film at the time helped usher a resurgence of musicals with ‘Hairspray’, ‘Sweeney Todd’ to name a few of films to follow its success. Between the very catchy songs used in the production and add director/choreographer Kenny Ortega in the mix, and this turns into a runaway success with a low budget production. Then throw in some very talented and enthusiastic teenagers, the films comes together very nicely.

The story of ‘High School Musical’ is rather simple as we have Troy (Zac Efron) who meets Gabriella (Vanessa Anne Hudgens) at a party where they end up signing together. After the party ends, they end up going their own separate ways until a week later Gabriella ends up transferring to his school. They both get romantically involved with each other……come on, this is High School, a musical, and some Disney fairy tale mixed in. Troy is also the basketball star of the high school and once his friends find out that he is auditioning for the winter musical they strongly are against it. The same thing happens with Gabriella as she is at a crossroads between the academic team and the musical.

Not only do they have problems with their teammates, there is also brother-sister Sharpay (Ashley Tisdale) and Ryan (Lucas Grabeel) waiting in the wings ready to stop anyone from getting the starring roles in the play. Troy and Gabriella have one wild ride as they try to decide what they want to do with the musical and all the interferences around them.

The cast is excellent here and both Efron and Hudgens do a remarkable job as the leads of the film. It is like they were born for these roles and their chemistry together is like magic on screen. Then add the supporting cast, which is also great. There are times where you dislike Sharpay, but are due to her character. The vocal performances are fantastic as they put all their efforts and energy towards their roles.
Movie Content: 4.5/5 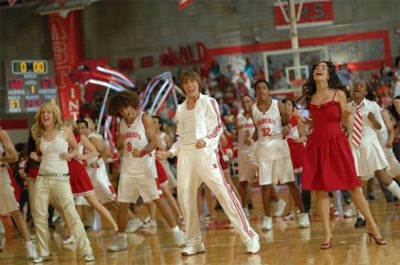 The print is presented in 1080p/AVC MPEG-4 with a 1.78:1 aspect ratio. The transfer isn’t great, mostly due to its made-for-TV movie origins. I can give Disney the benefit of a doubt and say the awful, and I mean awful grain is due to the low-budget production and film stock.
Print Quality: 4/5

The audio is presented in PCM 5.1 mix. The film’s soundtrack largely comes from the front speakers, with the surrounds only providing light reinforcement of the music on occasion. Audio quality is perfectly average, with a bassy score and clear dialogue.
Audio Quality: 4/5 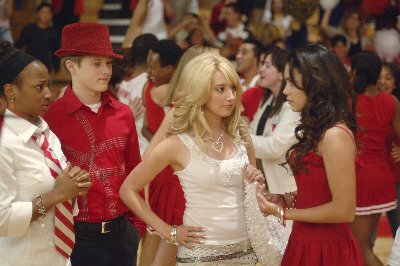 All special features are presented in standard definition.
Special Features: 4/5

The songs are catchy, upbeat, and the actors fit their roles perfectly. As an added plus, this movie is also completely clean and free of all the junk that contaminates movies teens watch nowadays. I highly recommend this movie to not only teens, but also to parents and other children. On Blu-ray, the film is a step above the DVD with improved video quality
Overall Rating: 4/5