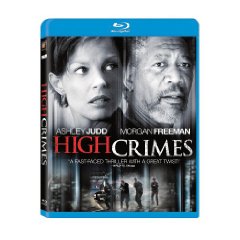 A welcomed reunion of Kiss the Girls costars Ashley Judd and Morgan Freeman makes High Crimes a worthwhile thriller with vivid, likable characters. Efficiently directed by Carl Franklin, this military mystery doesn’t have the unpredictable edginess of Franklin’s Devil in a Blue Dress, but its twisting plot is sure to hold anyone’s attention. Judd plays a successful, happily married lawyer whose husband (Jim Caviezel) is accused of killing innocent citizens during his military service in El Salvador some 13 years earlier. A cover-up implicates a powerful Brigadier General (Bruce Davison), but when Judd hires a maverick attorney (Freeman), Judd is caught in a potentially lethal trap of threats and deception. Attentive viewers will stay ahead of the action, and alleged villains are posed as obvious decoys. Still, Judd and Freeman have an appealing rapport (shared with Amanda Peet, playing Judd’s vivacious sister), and Freeman’s character flaws add worldly spice to yet another rich performance.

Claire Kubik (Ashley Judd) is a high-powered lawyer that is married to Tom Kubik/Ron Chapman (James Caviezel), a former Marine turned ‘collector’ (I think that’s what he is; they don’t ever really say). When some kids break into their house, the police take fingerprints and realize that Tom/Ron is actually a ‘wanted’ Marine because of his participation in the murders of some innocent peasants in El Salvador 10 some odd years before. So, after doing their Christmas shopping one evening, Tom/Ron is arrested by the FBI and sent to a military base to await trial for murder. Of course Claire decides she is going to defend him and picks up Charlie Grimes (Morgan Freeman) who has successfully defended a case against a military court before, as co-counsel.

As good as this movie was, there were a couple issues that got glossed over. After fourteen years passed, why would the Marines be so concerned over Chapman’s story that they would break even more laws by intimidating and then trying to kill Claire Kubik? Also, not all of the movie’s villains get the comeuppance they so richly deserved. At the finale, though it seems impossible, Freeman and Judd should have been together to face the end together.
Movie Quality: 6/10

The print is presented in 1080p/AVC MPEG-4 with a 2.35:1 aspect ratio. The print looks very good for this 7 year old catalog title. Colors are vivid and bright providing a nicely saturated presentation. Blacks are solid throughout the print. Flesh tones are natural looking with no enhancement. Details look very good in this film providing excellent depth.
Video Quality: 9/10

The audio is presented in DTS-HD MA lossless 5.1 mix. ‘High Crimes’ is a more dialogue driven film with excellent audio for the premise of the film. There are no action sequences, so don’t come in expecting a bombastic mix. Dialogue is very clean and crisp through the center channel. We have more of a front heavy experience with the mix as dialogue also tends to pan between the front speakers. When the rears get are in use, you hear a few sound effects and the score.
Audio Quality: 9/10

This is the kind of film that will keep you on the edge of your seat until the very end albeit several of my complaints about how there are many concepts of disbelief. On Blu-ray the film looks and sounds very good trumping the DVD in so many areas. If you were a fan of the film, this is highly recommended and replacing your old DVD won’t be so hard.
Overall Rating: 9.5/10