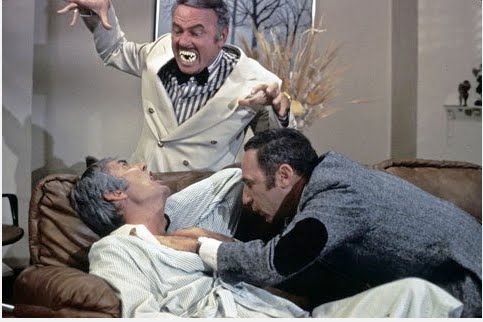 This is definitely one of Mel Brooks’ best efforts, ranking up there alongside “The Producers”, “Blazing Saddles” & “Young Frankenstein”. As the film begins, Brooks dedicates it to “the Master of Suspense, Alfred Hitchcock”; and to Brooks’ credit, he successfully (and affectionately) satirizes key scenes from Hitchcock classics like “Psycho”, “Vertigo” & “The Birds”. But “High Anxiety” is more than a mere parody: there’s the familiar Brooks nuttiness, and a re-assembling of old favorites (Madeline Kahn, Cloris Leachman, Harvey Korman, Ron Carey) mixed in with newer faces (Howard Morris, Dick Van Patten). The late 70’s look has dated the film slightly, but it hasn’t affected the humor; it is still one of the best comedies around. And Leachman plays one of the scariest looking women in film history—that of the pointy brassiere, sinister Nurse Diesel. As the leading man—the distinguished psychiatrist Dr. Richard H. Thorndyke—Brooks is forced to play it mostly straight through the picture, although he’s allowed to cut loose in a lounge singing scene and portraying an old Jewish man (with Kahn) to slip past airport security. Korman’s at his weasally best as a disgruntled fellow doctor who’s conspiring with Diesel, and Kahn is perfectly cast as the flaky “damsel in distress”, one of those “mysterious” woman types who pop up in suspense films. But the entire cast is terrific.

An affectionate homage more than a spoof of Alfred Hitchcock thrillers, Mel Brooks’s hilarious movie is one of the funniest modern comedies around. Brooks plays a psychiatrist with a severe fear of heights who moves to the Bay Area to take over a psychiatric hospital after its former head mysteriously disappears. He must contend with the resident psychiatrist (Harvey Korman) and the twisted resident nurse (Cloris Leachman) as they plot against him, eventually framing him for murder. While on the run, Brooks teams up with the alluring daughter (Madeline Kahn) of the missing doctor to solve the mystery and confront his own fears. Containing some classic sequences and cowritten by Barry Levinson (Rain Man, Wag the Dog), who appears briefly as a too-touchy bellhop in a Psycho-shower-scene takeoff, High Anxiety is a thoroughly enjoyable romp from one of the masters of comedy today.

Mel Brooks wrote and directed “High Anxiety” in 1977 as an homage to Alfred Hitchcock thriller films. Brooks also stars in the film as the new head of the Psycho-Neurotic Institute for the Very, Very Nervous and strange things begin to happen and he must try to get over his issue with heights to clear his name when he is accused of murder.

Mel Brooks plays Richard H. Thorndyke has a phobia of heights and nightmare that are a nod to the film “Vertigo.” Professor (Lill-ol-man) Lilloman played by Howard Morris is based on a character in “Spellbound.” There is a lobby from “North by Northwest” and Mel Brooks has a shower scene using tons of different shots like in “Psycho” letting his character get stabbed with a newspaper and watching ink wash down the drain. An abducted family member follows the story of “The Man Who Knew Too Much.” Countless references that I will never fully get unless I commit to going back to the source material.

The story is pretty silly blending all these elements together. There is some greater conspiracy at the Institute about a murder cover-up, phobias, kinky staff, and a mysterious blond trying to save her father being kept there. There are many specific references to Hitchcock films and not all will be easy to catch unless you have watched a lot of them. Mel Brooks worked hard to try and make this film as enjoyable as possible for non-Hitchcock viewers as well but without that knowledge, only the physical comedy comes across. The most memorable part is Mel singing “High Anxiety” with his best Frank Sinatra impression and getting attacked with tons of bird poop from the “Birds”.
Movie Content: 7/10

The print is presented in 1080p/MPEG-4 with a 1.85:1 aspect ratio. While this is the best this film has looked to date for home video, there is some issues that I had with the print. Colors lacked any kind of punch and the film holds a very soft/dirty look throughout. There is heavy grain throughout the print, but tends to taper off a bit as the film progresses. Black levels are deep which I found to be a positive for this film. Details are good for up close shots providing some nice clarity overall. This has to be at the bottom of the barrel for the video presentation when compared to all the Mel Brook’s releases on Blu-ray. Again, this is a definite upgrade over the DVD.
Video Quality: 7/10

The audio is presented in DTS-HD MA lossless 5.1 mix. This film has a very front heavy experience with little audio peering through the rears. Considering the age of the film, I was not surprised that this was more front heavy overall. Everything coming through the front sounds nice and clear. Dialogue is prevalent through the center channel with no apparent issues. Do not go in expecting much from the rears because you will be disappointed.
Audio Quality: 7/10

This isn’t one of my favorite Mel Brooks films as I “Blazing Saddles”, “History of the World: Part 1”, “Spaceballs”, “Young Frankenstein”, and “Robin Hood: Men In Tights.” If you are a fan of Mel Brooks films you might already own the Collection which released in December, if not this is a great way to get a taste of one of his films from the late 70’s that helped lead into a line of excellent titles to release in the 80’s. On Blu-ray the video and audio mix are the best we have seen for a home video release, but not up to the standards that we would expect for even a film at 33 years old.
Overall Rating: 6/10