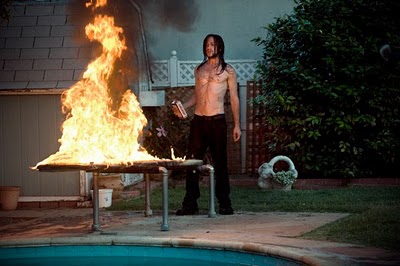 Loud music. Pornography. Lighting fires. These are a few of Hesher favorite things. And they are what Hesher (Joseph Gordon-Levitt) brings into the lives of TJ (Devin Brochu) and his father Paul (Rainn Wilson) when he takes up residence in the garage uninvited. Grief stricken by the loss of TJs mother, Paul canmuster the strength to evict the strange squatter and soon the long-haired, tattooed Hesher becomes a fixture in the household. Like a force of nature, Hesher anarchy shakes the family out of their grief and helps them embrace life once more. 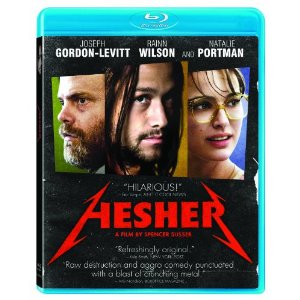 Rarely in a film do I find a quote within it that perfectly describes the lessons it’s trying to portray. In “Hesher”, directed by Spencer Susser, this quote resonated with me. It was not until I heard that line that I fully understood what this movie was about. “Hesher” is a great film. One with a lot of heart and some brilliant writing. Joseph Gordon-Levitt plays the outrageous Hesher perfectly and is by far (aside from “Mysterious Skin”) his best work to date.

“Hesher” plays out like a weird dream. T.J., impressively played by Devin Brochu, is a young boy struggling with the loss of his mother. He lives with his father Paul and his grandmother. Paul, played by Rain Wilson, has fallen into a deep depression letting go all of his responsibility to his son and his own mother. It’s a very tragic situation they are in. In a fit of rage T.J. vandalizes what he thinks is an unoccupied building and as a result is confronted by Hesher, terrifying T.J. in the process. Hesher decides to follow T.J. to his home and lets himself in. T.J. can’t do anything about this random person entering the house, doing laundry and generally just making himself at home for fear that Hesher will harm his family. What follows is a plethora of black comedy and heartfelt change within both Hesher and this distraught family.

At it’s heart, “Hesher” is a film about not being able to see the things that are right in front of us until an outsider smacks us in the face with reality. This isn’t apparent in the beginning of the film, but as Hesher gets to know the family and the situation they are in he goes from “house squatting” to being part of the family. In doing so the family is able to climb out of the rut they are in and fill the void left by the passing of the mother with the idea that life goes on. The film takes a lot of time to get to this realization, but the time spent getting there is great fun to watch.

Joseph Gordon-Levitt impresses me more every time I see him. His portrayal of the careless, fowl mouthed, violent, heavy metal loving outsider that we have all known at some point in our lives is spot on. Levitt seemed to really engulf himself into this role, almost to the point where he wasn’t acting and just being himself. Rain Wilson also impressed me. His feature films have generally been him re-hashing his role from “The Office” in various outrageous situations. This time he was genuine and proved to this reviewer that his range goes beyond the weird goofball we are used to seeing. Natalie Portman plays the small role of T.J.’s older love interest. She was good, but her role seemed more like filler than anything else. There is nothing wrong with that, her character just wasn’t an important role to the story it seemed.
Movie Quality: 9/10

The print is presented in 1080p/AVC MPEG-4 with a 2:44:1 aspect ratio. ‘Hesher’ sports a very interesting print encoded at 2.44:1 which you don’t see everyday. For a low budget film, ‘Hesher’ looks pretty good on Blu-ray. I was quite surprised at how strong the colors were especially with scenes outside during the day. May of the indoor scenes are on the darker side and black levels hold up pretty well except for times where there is a black crush. For a low budget film, ‘Hesher’ looks really good on Blu-ray.
Print Quality: 9/10

The audio is presented in a DTS-HD MA l0ssless 7.1 mix. This is a very atmospheric and immersive sounding film. The rears have quite a work out with sound effects panning across the speakers. Then add the metal soundtrack from none other than Metallica helping really fill the soundfield. This is a bombastic audio mix, which I wouldn’t expect anything less from Lionsgate. There are many scenes that are outside which also take advantage of the soundfield providing some dynamic sound. Dialogue is clean through the center sounding ever so crisp.
Print Quality: 9.5/10

This film goes much deeper than what is on the surface. Director and writer Spencer Susser did an amazing job with keeping the underlying meanings hidden until the right time for them to come to fruition. Not once was I bored with what was going on and I couldn’t wait to see what the next scene had to offer.
Overall Rating: 8/10