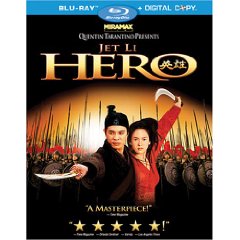 Director Zhang Yimou brings the sumptuous visual style of his previous films (Raise the Red Lantern, Shanghai Triad) to the high-kicking kung fu genre. A nameless warrior (Jet Li, Romeo Must Die, Once Upon a Time in China) arrives at an emperor’s palace with three weapons, each belonging to a famous assassin who had sworn to kill the emperor. As the nameless man spins out his story–and the emperor presents his own interpretation of what might really have happened–each episode is drenched in red, blue, white or another dominant color. Hero combines sweeping cinematography and superb performances from the cream of the Hong Kong cinema (Maggie Cheung, Irma Vep, Comrades: Almost a Love Story; Tony Leung Chiu-Wai, In the Mood for Love, Hard Boiled; and Zhang Ziyi, Crouching Tiger, Hidden Dragon). The result is stunning, a dazzling action movie with an emotional richness that deepens with every step.

“Hero” as has been said by many others, is a visually stunning peice of film-making and quite possibly the most beautiful film of 2004, and perhaps the five years before that as well. The acting particularly by the dramatic leads (Tony Leung, and Maggie Cheung) is spectacular and supporting performances by Jet Li, Donny Yen and Chen Daoming are excellent. Zhang Ziyi does her usual histrionic eye-candy routine. Personally I am not a great fan, but she does her job and doesn’t get in the way too much. Why Tony Leung would have chosen her over the infinitely-sexier Maggie Cheung is way beyond me, but I digress.

The story is typically Chinese in that character is not nearly as important as plot. The job of the actor is to suggest character depth based on the parameters of the character given. In some cases e.g. Donnie Yen’s aristocratic Sky, this can be done even with minimal lines. In other cases, most obviously Jet Li’s performance as Nameless, the character serves to drive the plot and is not meant to be psychologically complex or emotionally compelling.

My personal view of “Hero” is that it is Zhang Yimou’s answer to the philosophical issues raised by Ang Lee’s “Crouching Tiger, Hidden Dragon”, in which duty and happiness are juxtaposed against one another, with the moral victory going to the latter.

For Zhang, the answer is not nearly as clear. “Hero” ends with the defeat of the forces of beauty, skill and integrity, and the triumph of totalitarianism and unflinching vision. QIn Shihuang is a monster, Zhang posits, but he is the only man who can unite the country and usher in 3000 years (or however many it currently is) of Chinese greatness.
Movie Quality: 9/10

The print is presented in 1080p/AVC MPEG-4 with a 2.35:1 aspect ratio. Colors are rather dull throughout the entire presentation. This is very disappointing that colors did not receive top billing with this transfer. Blacks are rather solid. Fleshtones look very natural, yet details are lacking in a few areas as they were out of focus at times. This is better than the DVD release and better than all the Kung Fu releases from this past week, but still a disappointment.
Video Quality: 6/10

The audio is presented in English DTS-HD MA lossless 5.1 mix. Many will be disappointed here that the original Mandarin language track is only available in Dolby Digital 5.1 mix instead of a lossless track. While the image has several issues, the audio fairs a tad bit better here but not by much. During the action scenes there is quite a bit going on in the soundfield.  Dialogue through the center channel was clean and crisp with no apparent issues.
Audio Quality: 7.5/10

“Hero” the film itself is a rather enjoyable experience from start to finish and having seen this film multiple times over the years, it just gets better with each viewing. This is the best of the four Kung Fu releases from this past week, but I was disappointed with the video and audio quality. It’s exciting when catalog titles come to high definition on Blu-ray, but not this way. I can only recommend this to hardcore fans as it will be worth the upgrade over DVD, but not by much.
Overall Rating: 7.5/10