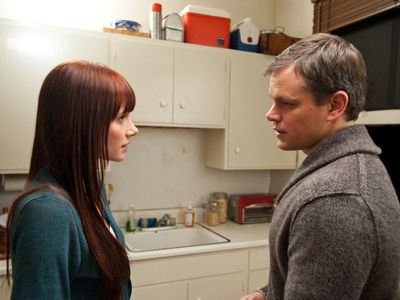 Genre master Clint Eastwood tries something different with the languid, introspective Hereafter–and succeeds (for the most part). All of the characters at the heart of Peter Morgan’s screenplay, which has the feel of a European art film, have suffered a loss or survived an ordeal. They feel disconnected from those who can’t relate, which is most everybody. George Lonegan (Matt Damon, Invictus), a Bay Area factory worker, developed psychic powers after a childhood illness but just wants to lead a normal life, despite his brother Billy’s efforts to turn him into a John Edwards-like celebrity (Jay Mohr plays Billy). Marie LeLay (the versatile Cécile De France), a TV reporter, emerges unharmed from 2004’s Indian Ocean earthquake, only to find her Parisian existence slipping away from her (the tsunami sequence that opens the film is frightfully convincing). And in London, soft-spoken 12-year-old Marcus (Frankie McLaren) loses his twin, Jason (George McLaren), only to end up in foster care. While George reaches out to a lovely, if insecure woman (the overly jittery Bryce Dallas Howard) he meets in a cooking class, Marie writes a book about her experience, and Marcus seeks spiritual guidance. In a Babel-like turn of events, all three find themselves in the United Kingdom, where they cross paths, but what sounds contrived plays out in a surprisingly believable fashion. Eastwood and Morgan (The Queen) don’t presume to know what happens after death, suggesting instead that those who search for answers deserve something other than disrespect and derision.

Clint Eastwood’s Hereafter tells three parallel stories about three people affected by death in different ways; Matt Damon plays American factory worker George, who is able to communicate with the dead; Cecile de France plays French television journalist Marie, who survives a tsunami and Frankie and George McLaren play Marcus and Jason, an English boy and his elder twin brother who suffers a devestating loss and goes on a hunt for answers.

Eastwood is careful not to offer any answers on the afterlife in his film because as he says at one point there are no answers to offer. He tells a good story that forces the viewer to evaluate his own ideas on death and what if anything comes after it. The film is much more than a meditation on death it is a carefully drawn portrait of how death affects people no matter where they are located nor whatever is their place in society. One of the interesting things that Eastwood does and is to be congratulated for is that he chooses to present his French segments in French with subtitles rather than pandering to those who feel that everything must be in English this gives the film a feeling of reality.

The film is not always easy to watch but it does provide a good oppurtunity for discussion. The Blu Ray disc presents the film and a series of focus point videos dealing with the production. Of special interest is the video which deals with the creation of the tsunami effects for which the film got its only Oscar nomination. Other featurettes deal with skeptics and mediums and a short on twins. This is an excellent package for a film that gets better on repeat viewings by a director who seems to be contemplating his own mortality.

The print is presented in 1080p/AVC MPEG-4 with a 2:35:1 aspect ratio. The film is very colorful throughout. Colors are vibrant carrying a more natural color palette. Blacks are also very strong and deep. With strong colors and deep blacks, it brings out the fine details. Details are very good. Fleshtones also look very natural. The print is as clean as a whistle with a very pristine look. There is some noise in the background, but nothing distracting.
Print Quality: 9/10

The audio is presented in a DTS-HD MA lossless 5.1 mix. ‘Hereafter’ is mainly a dialogue driven film. Dialogue through the center channel is very clean and crisp. The music on this soundtrack is what mainly pushed the audio in the soundfield. The rears would mainly get some action when music would play or the use of any effects..
Print Quality: 9/10

It’s no surprise audiences are mixed on the film. I have a feeling most are expecting a more eerie, supernatural thriller type of movie, ala The Sixth Sense. I personally prefer the more intimate picture Eastwood has crafted. It’s all rather low-key, but this is a very “nice” film that I enjoyed a lot.
Overall Rating: 9/10