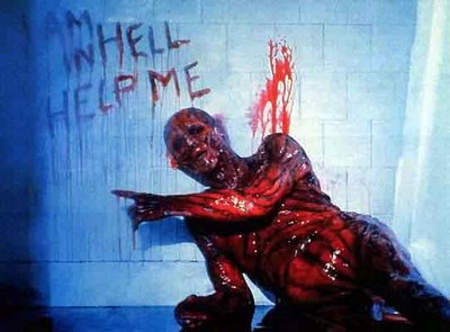 In 1988, it emerged as the shocking follow-up to the film that redefined the face of horror. Two decades later, it remains the most brutally original sequel in horror film history. Clare Higgins, Ashley Laurence and Kenneth Cranham co-star in this hit sequel from executive producer Clive Barker that experiences the flesh like no other. The time to play has come again: Surrender yourself to the infernal labyrinth of Hellbound: Hellraiser II. 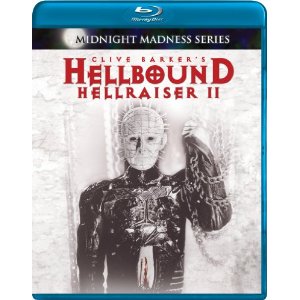 The film opens with a quick recap of how the original ended, before we see (briefly) how Pinhead came to be his nail-studded form. Kirsty (Ashley Laurence) from the first film is now in a psychiatric hospital after the carnage is discovered at her father’s home. Kirsty tells the police and staff what happened, but not believes her of course. Soon, however, the malevolent Dr. Channard (Kenneth Cranham) who runs the hospital has succeeded in resurrecting Kirsty’s step-mother Julia (Clare Higgins), who (like Frank from the first film) has no skin. Also along for the ride this time is Tiffany (Imogen Boorman), a patient at the hospital with a talent for solving puzzles. And, of course, Pinhead and his fellow cenobites have much more screen time.

Now, the makeup effects are much more gruesome this time around. Julie does look frightfully grotesque. I advise you not to eat while watching this movie. Seeing her does make one’s stomach churn. Although, it’s worth noting that nothing about this movie is disturbing, but much of it is disgusting.

There is some pretty good imagery in this film though and the set/art direction is certainly more finely crafted. Some of the visual effects are, however, incredibly 80s and as such have not aged very well.

As for the character’s, Channard is a caricature. He has a foreboding voice and is instantly untrustworthy. When he appears in cenobite form, I shook my head a little. He looks like a cross between a Power Rangers villain and a creature from Beetlejuice.

With that said, I still find the cenobites to be some of the more unique creations to emerge from 80s horror. The fact that their whole existence is shrouded in mystery makes them all the more fascinating…And what makes it so disappointing that they had to dig deeper into the Pinhead character. He was such a menacing presence in the first film; I think the decision to expose his humanity wasn’t very wise. It doesn’t bring much depth to the character and succeeds only at making him less frightening and therefore less effective.
Movie Content: 9/10

The print is presented in 1080p/AVC MPEG-4 with a 1.78:1 aspect ratio. Being a fan of the ‘Hellraiser’ films, I was expecting a bit more from this film on Blu-ray. This print looks slightly better than it being upconverted via DVD. There are times where the print looks decent and other times just looks downright unimpressive. There is heavy grain and noise throughout which can be distracting. Colors such as red. green, and blue stick out very well in HD. Details aren’t the greatest either, which are good for close ups, but scenes where the camera pans away just doesn’t look good. There is also print damage which I would have expected to be cleaned up.
Video Quality: 6/10

The audio mix is presented in DTS-HD MA lossless 5.1 lossless track. ‘Hellraiser II’ has a nice mix between dynamic and dialogue driven scenes. Christopher Young’s score takes advantage of the DTS-HD MA lossless 5.1 mix filling the entire soundfield. This is a aggressive sound mix as one would expect during the action sequences. Sound effects fill the surrounds pouring into the soundfield. Dialogue is centered properly through the center channel providing a nice deep clarity. During dialogue driven scenes, this is very important on the depth as I have seen with a few DTS-HD mixes lacking dialogue depth.
Audio Quality: 8.5/10

“Hellbound: Hellraiser II” is miles above and beyond the myriad of sequels that would follow in its wake. Fans of the first will appreciate the fact that it attempts to take things one step further, and although it stumbles along the way, in the end, it’s a gruesome and grueling experience that more than lives up to its name.
Overall Rating: 7/10