Posted in DVD Reviews by George Theofanopoulos on 09 September 2009 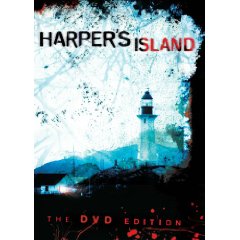 Harper’s Island, the guiltiest pleasure of the 2009 summer TV season, is part Agatha Christie and part Friday the 13th. This cleverly plotted 13-episode CBS mystery event invites return visits to the eponymous island where a good portion of an ill-fated wedding party will not survive to celebrate the happy couple’s first anniversary. Harper’s Island begins with a “Whap” and goes out with a “Sigh” (each onomatopeaic episode title replicates the sound of a victim’s demise). Here’s the set-up: Pauper Henry (Christopher Gorham) and princess “Trish” (Katie Cassidy) have invited family and friends to Harper’s Island, located 37 miles off the coast of Seattle, for their nuptials. Seven years earlier, John Wakefield slaughtered six people there. These were the first murders in the history of the island. A title card warns us they will not be the last. One by one, episode by episode, a killer (or killers) methodically picks off the wedding guests in grisly and gory fashion. Some characters are more expendable than others, and those who are dispatched early don’t get the chance to make much of an impression (cousin Ben doesn’t even make it out of the dock in the opening episode), but as the mystery unfolds and the body count escalates, viewers become more emotionally invested in those who survive the longest. For Abby Mills (Elaine Cassidy) this is all kinds of personal. Abby, Henry’s once-inseparable childhood friend, has not been back to the island since Wakefield, presumed dead, slaughtered her mother. She is reunited with her estranged father, the sheriff (Jim Beaver), and Jimmy (C.J. Thomason), the boy she left behind. Harper’s Island will keep viewers guessing until its final twist, which is a doozy, although somewhat suspect. But until then, the series is an effective horror show that gets under your skin with its attractive cast, soap-opera dramatics, tantalizing red herrings, and quality kills (although nothing in the show is as creepy as the unnerving little girl named Madison). Those who missed the boat when Harper’s Island first aired are advised to steer clear of the spoiler-heavy bonus features until you’ve watched it through to the bloody end.

The series is a self-contained 13-episode murder mystery event, which means all loose ends are tied up and most questions answered within its thirteen episode run. Networks should embrace this formula more often as it discourages the many filler episodes that plague so many other shows that have been on air for seasons. Since there is no second or third season, producers don’t feel the need to continually provide more questions (and no answers) to string viewers along for years. More often than not, these shows often get canceled before viewers get a chance to have their loyalty rewarded with a satisfying conclusion. “Harper’s Island,” while flawed, is an extremely enjoyable, and intense series with more heart than you would expect from a slasher television show. Sure this isn’t Shakespeare, but there is more to the characters than your typical “Friday the 13th” installment.

The show revolves around a wedding party held on an island–eventually, characters (and wedding guests) start dying off in gruesomely creative ways, while those remaining are either fighting for their survival or serve as suspects. Episode titles are in onomatopoeia form, which gives viewers a hint at how one or more unlucky character will bite the dust in any given episode (i.e. Thwack, Splash). CBS billed this series as a Survivor-esque meets “Scream” format–meaning, each week one (or more) character is murdered, narrowing down the field of potential suspects before the ultimate reveal at the end.

The show does it have its flaws–the first few episodes are a bit uneven in quality as the producers try to set up character motives and various plot points. There are too many characters that only serve as slasher fodder in the beginning, but it doesn’t take long, before the series dives into a suspenseful tour-de-force that never eases up until the last reel. Those characters who manage to live past the first five episodes or so, grow on viewers who will find themselves genuinely interested in the various characters’ fates.

A keen viewer will most likely be able to guess the killer’s identity before the reveal, but it doesn’t make this show any less enjoyable. The cast is pretty much superb offering stellar performances, my favorite being Katie Cassidy of “Supernatural” fame. Slasher series in the past have been derailed by critics who have denounced the films’ lack of character development. The advantage of this series is that the characters and stories evolve over a 13 episode timespan, which gives the viewers at home more than enough time to bond and become attached to the various characters. For example, one character may seen vapid and uninteresting in episode one, but towards the end, he or she is fully fleshed out and sympathetic to those watching at home.
Movie Quality: 7/10

While there are flaws scattered throughout the show, and while not every plot twist and turn is original or even unpredictable. For those of you who missed the series I suggest renting first.
Overall Rating: 7/10