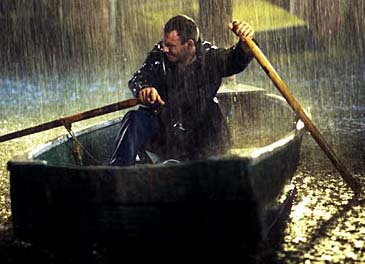 It may not be a disaster movie, per se, but this terminally silly thriller is certainly disastrous, and would be pointless without the novelty of its setting in a flooding Midwestern town during a torrential rainfall. Physically impressive but idiotic in every other respect, the movie pits an armored truck courier (Christian Slater) against a smart leader of thieves (Morgan Freeman) and a corruptible town sheriff (Randy Quaid) who are vying for possession of $3 million in cash. A waterlogged game of cat and mouse, the plot is so contrived that even the most impressive action sequences–such as a jet-ski chase through flooded high-school corridors–are robbed of their already tenuous credibility. Before long you’ll be yawning as incompetent accomplices are systematically dispatched by their own stupidity, in the kind of movie where the use of power boats inevitably leads to at least one death by outboard motor. What’s impressive here is the physical production itself–the effect of flooding was created by building a huge replica of downtown Huntington, Indiana, in a huge, watertight aircraft hangar in Palmdale, California! 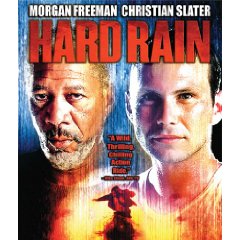 Morgan Freeman dishes up his usual excellence in this role – a crook looking for a retirement fund, with a typical crew to help – a screwup 20s rowdy, an unemployed high school science teacher, and a scripture-quoting pro. Christian Slater is, well, Christian Slater – I’ve been a fan for years, and this is yet another appearance of the wisecracking, intrepid guy that Mr. Slater plays so often. It’d get repetitious if it weren’t so much fun. He’s at the end of a “clean out the banks before they’re flooded” run, with $3 million in the truck when it’s stuck in a deep spot in the ever-present water.

Minnie Driver does a fine, if understated, job as the woman who stayed in town too long, preparing a church she’s been restoring to weather the flood, who gets involved in the scramble for the cash. While she’s on the side of the good guys, there’s no real steam between her and Slater. Randy Quaid is the Sheriff who recently lost his re-election, and is bitter and angry, but determined to do a good job as long as he’s on the clock – until the temptation of that money proves to be too much for him.
Movie Content: 8/10

The print is presented in 1080p/AVC MPEG-4 with a 2.35:1 aspect ratio. For a film set almost entirely in a nighttime rain, the camerawork is amazingly good. The effects work nicely, the flood gives us an element that’s unusual in action films. I found the image to be more on the dull side as colors didn’t pop as much as I would have hoped. I think a lot of that has to also do with the dark nature of the film. I found details to be strong though which helps with dullness of the image. Blacks can be inconsistent at times, but for the most part they stay strong. The image is not pristine from white specs or even a slight amount of artifacts. While not the greatest Lionsgate catalog release, it is one of the better ones from this latest batch of releases.
Video Quality: 8/10

The audio is presented in DTS-HD MA lossless 7.1 mix. This is a very aggressive mix considering the DTS track did the same, especially with the first few minutes of the film. I thought I was going to be blown away with all the explosions in tow. The rears get a nice amount of usage in the soundfield providing panning sound effects. Hearing the rain peering into the soundfield pretty impressive. Dialogue through the center channel is very clean and crisp. The mix is well balanced between the dialogue and soundfield.
Audio Quality: 9/5

This movie is a good action/thriller with nice cinematography and a plot that keeps you guessing until the end. If you are in the mood for a mindless action film, ‘Hard Rain’ will not disappoint. The video presentation is lacking which I did not expect, but the audio sure makes up for it. Special features are truly lacking which is a shame here. If you are a fan of the film, upgrading to the Blu-ray is a no-brainer.
Overall Rating: 7.5/10