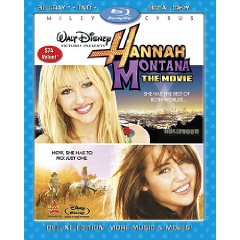 It’s easy to forget that superstars are real people, but when Hannah Montana (Miley Cyrus) shows signs of forgetting her roots as Miley Stewart, her father Robbie Ray (Billy Ray Cyrus) puts his foot down. Miley has always strived to live a relatively normal teenage life, but when late stage entrances, exclusive shopping trips that end in brawling catfights, and ditching friends and family in favor of Hannah appearances become commonplace, Robbie Ray whisks her away from a date at the New York Music Awards for a dose of hometown reality at her grandma’s in Crowley Corners, Tenn. Unfortunately, she’s followed by Oswald (Peter Gunn), a relentless reporter from Britain’s Bon Chic Magazine. Miley’s initial fury at being tricked into staying at Grandma’s spurs her to commence operation Save Hannah Montana, but her bad attitude eventually gives way to resignation and then the beginnings of reconnection between Miley and her family.

As the days progress, Miley glimpses her growing self-absorption, finds she’s attracted to old elementary friend Travis (Lucas Till), realizes that her selfishness has negatively affected her dad’s personal relationships, and is drawn into her grandma’s fight against the commercialization of Crowley Corners. A boastful impulse leads to Miley being charged with bringing Hannah Montana to Crowley Corners for a benefit concert; when Miley’s worlds collide onstage, she reveals her true identity and declares that Hannah Montana is no more. Can Miley’s hometown possibly keep Miley’s secret, silence the reporter, and convince Miley that she can have the best of both worlds, or is this the end of Hannah Montana? Well-known Hannah Montana songs, including “Best of Both Worlds” and “Let’s Get Crazy” are featured in the film as well as the fun new song “Hoedown Throwdown” (complete with line dance instruction), the heartfelt “Butterfly Fly Away,” and the inspirational “The Climb.” More important than the great music is the film’s wholesome message about staying true to oneself and one’s family and friends.

I liked this movie as much as my kids did. Anyone, any age, would enjoy this movie as family values take center stage in this movie. All the actors did a great job. When Miley sings “The Climb”, you think to yourself what a beautiful song. Don’t think you are too old to watch Hannah Montana because you are not. You do not have to be a fan of the show to enjoy this movie.

The music was super fun and the moral of the story was a good one revolving around putting family and friends first, making difficult decisions and dealing with the consequences. It’s a good “part of the road to growing up” movie. I am so glad to see that the television show to theatrical transition was great. I was concerned at first thinking that this film would be mediocre and could not live up to the show, but I was proven wrong..
Movie Quality: 10/10

The print is presented in 1080p/AVC MPEG-4 with a 1.85:1 aspect ratio. The print looks very good albeit the unexpected soft look of the film in several scenes. Colors are vibrant which brings out the fine details. The detailed scenes stand out very well when they do. The soft look during several scenes takes away from the top notch details. Blacks are deep. There is a thin layer of grain present throughout the entire print.
Video Quality: 8/10

The audio is presented in DTS-HD MA lossless 7.1 mix. The film is dialogue and music driven. The music-driven sequences and music really comes alive with this audio mix. I did notice a few instances of the rear channels not getting the usage I would have expected. This film is more front heavy than one would expect.
Audio Quality: 8.5/10

As I mentioned in the review, this is an excellent family film that tells a great moral story. On Blu-ray the video and audio were a bit underwhelming. I highly recommend this film to fans and non fans.
Overall Rating: 9.5/10