Posted in DVD Reviews by George Theofanopoulos on 01 April 2009 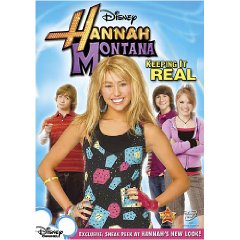 In the latest volume of the popular Disney television series, a total of five hilarious and fun “Hannah Montana” episodes to satisfy the Miley fans and the entire family!

Having a child that is a big fan of various Disney series, ‘Hannah Montana’ has been part of our household family viewing for years. So, suffice to say that I have watched many episodes of ‘Hannah Montana’ to get a good feel of what the series is about and that the DVD releases tend to revolve around a certain theme than episodic episodes in order. For those not familiar with the television show that launched the career of pop star, Miley Cyrus, ‘Hannah Montana’ is a popular Disney Channel television series which started back in 2006 and revolves around a family of three.

Miley Stewart (Miley Cyrus) is a normal teenage girl but when she goes on stage and records an album, she dons a blonde wig and is known as the popular pop idol Hannah Montana. Her father/manager Robbie (real life father, Billie Ray Cyrus) has given her the dual identity so she can live a normal teenage life. She lives with her brother Jackson who is a bit of goof off who tends to get himself into some sort of predicament at home or at work at the hot dog stand owned by young entrepreneur Rico (Moises Arias).

Overall, as a father of a child who enjoys the series, the show definitely had it’s hilarious moments and for five episodes for a low price, you really can’t go wrong with it. Fans of Miley Cyrus and “Hannah Montana” won’t be disappointed.
Overall Rating: 8/10