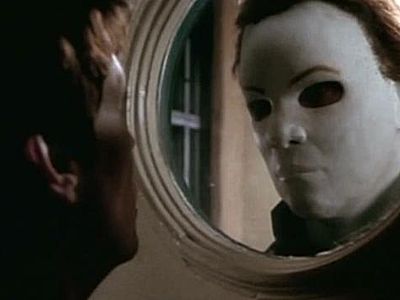 Now the headmistress of a private school, Laurie Strode (Curtis) is still struggling with the horrifying, 20-year-old memories of the maniacal killer Michael Myers…when he suddenly reappears with a vengeance. Laurie’s rebellious son (Josh Hartnett, 30 Days of Night), his girlfriend (Michelle Williams, Shutter Island), and the school security guard (LL Cool J, TVs NCIS: Los Angeles) will become Michael’s newest victims unless Laurie can conquer her greatest fears and put evil in its place once and for all. The time has come again for you to experience the frightening fun of Halloweenthe motion picture series that totally redefined terror. 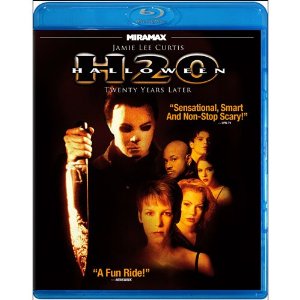 For twenty years, the unstoppable Michael Myers has carved his way through promiscuous teenagers for audiences’ thrills and enjoyment in the Halloween franchise, though some installments were more effective at frightening its audiences than others. After Jamie Lee Curtis left the franchise to further her career, the franchise tried to make do without her. Halloween III was a failed effort to turn the series into The Twilight Zone, while Halloween 4, 5, and 6 featured Michael stalking a new familial target while killing more teenagers along the way, and they even dared to give some kind of mystical explanation to Michael’s immortality. It seemed like the series had hit rock bottom.

But then Jamie Lee Curtis, the original “Scream Queen”, decided to return for a 20th anniversary film, hence the title “Halloween H20” (though some thought the title implied that Michael Myers would be stalking people underwater or on a cruise ship). Jamie thought it would be interesting to get everyone back together for a reunion. However, Donald Pleasence, who had lived in the role of Dr. Loomis for years, had passed away after the completion of Halloween 6, and John Carpenter declined to be involved, having washed his hands of the series long ago. Director Steve Miner, helmer of Friday the 13th Part 2, was tapped to direct instead.

As earlier stated, Halloween H20 takes place in 1998, 20 years after Michael Myers first tried to kill his sister Laurie Strode, and the film acts as if all the sequels after Halloween II never happened, effectively becoming “Halloween III” in a sense. To avoid future attacks from her brother, Laurie changed her named and moved out to California, where she started a new life. Headmistress of a private school and the overprotective mother of a teenage son John (Josh Hartnett), Laurie is still haunted by nightmares and hallucinations of Michael. But her nightmares come true, as Michael returns once again, and Laurie must not only find the courage to protect her son, but find the strength to confront her demons and face her brother once and for all in a fight to the death.

This should have been the end of the franchise, a fitting swan song for an iconic movie monster who terrorized audiences for two decades and the cap to a story of one of cinema’s most memorable protagonists coming full circle and finally getting the revenge and closure she deserves. Hollywood seems allergic to finality, always leaving room for the next sequel to make money off of. Halloween looked to be one of the rare exceptions when H20 was released, knowing that it had run its course and that it had an opportunity few of its contemporaries ever get – to say goodbye the right way. But like Michael Myers himself, the franchise never seems to die, no matter how many beatings it takes. H20 would be followed up with Halloween: Resurrection and later with Rob Zombie’s own retread of the Halloween story, once again pushing the series into territory that would aggravate new and old fans.
Movie Quality: 9.5/10

The print is presented in 1080p/AVC MPEG-4 with a 1:78:1 aspect ratio. The DVD and Theatrical releases were in 2.35 aspect ratio, while this new Blu-ray release is in 1.78:1 aspect ratio. Echo Bridge in my opinion is taking masters that were probably meant for broadcast television and porting them to Blu-ray without any thought on how they are ruining these releases. Having owned and viewed the DVD release countless of times over the years, I was waiting for the day that this title would be released on Blu-ray. When I heard that a release date was set for this film on high definition I was beyond excited. The day is here that we are able to get ‘H20’ on Blu-ray and the results are very mixed. Colors are good, but not strong with this print. I think what ends up hurting colors in this Blu-ray release is that the tone of the print is dark, which is not apparent with the DVD release. Whatever Echo did with this print to make it look darker like good lighting wasn’t used on the set, they did with the ‘From Dusk Till Dawn’ Blu-ray release. One area where the print is better than the DVD are the scenes with blacks, especially in the darker evening scenes. On DVD, blacks looked very faded and gritty as opposed to the Blu-ray which are solid looking.

Details and clarity are decent, as they go from good to bad being very inconsistent. Clarity seemed to be worse when the camera was panned further away. In many scenes it looks like the loss of clarity goes down to DVD levels. Fleshtones in several scenes, especially ones in exterior shots tend to run on the hotter side of things which looks like DNR to me. I found the same exact issue with Echo’s release of ‘From Dusk Till Dawn’, where DNR was rampant in faces and many of the building signs. I did not notice any grain at all in this print as opposed to what was on the DVD. I just watched the DVD not too long ago and the DVD has that very murky look which is not apparent on this Blu-ray release for those wondering. If you do not have access to the Canadian Alliance release on Blu-ray, this is a decent upgrade over the DVD, but not enough to make you wanting to spend another $10 on a movie that should have received restoration treatment.
Print Quality: 6/10

The audio is presented in a DTS-HD MA lossless 2.0 mix. I am not too happy that Echo Bridge went with the DTS-HD 2.0 on this release, but it does have a lot of punch. This mix is a very aggressive front heavy experience and it leaves the viewer wondering how good this would have sounded with a 5.1 mix. With the DTS-HD 2.0 mix, one area where this mix is really good is with the dialogue. Dialogue comes through very clean and crisp with no apparent issues. The soundtrack is also one that would have benefited from a full 5.1 mix along with the score considering how aggressive the DTS mix is for this release.
Print Quality: 6/10

As far as sequels go, however, H20 works pretty damn well, and provides a highly entertaining experience. Carpenter is one of horror’s finest directors, and H20 is almost worthy of joining the ranks of his trilogy masterpiece (Halloween, The Fog, The Thing). On Blu-ray, I am left very disappointed that Echo Bridge took over a portion of the Miramax library and are offering totally bare bones releases with lesser quality picture quality, DTS-HD MA lossless 2.0 mix, and no special features at all. As a huge horror fan, adding this release to my collection was a no brainer and upgrading from DVD until I got the chance to view this disc which sent me running to an online import store to order the Canadian Alliance release. When my wife is sitting there viewing this film with me and turns and says that this does not look good for a Blu-ray, and if we are watching the DVD, then you know that there is something wrong. Spending your heard earned dollars in times where the economy is in bad shape could be money well spent elsewhere.
Overall Rating: 6/10