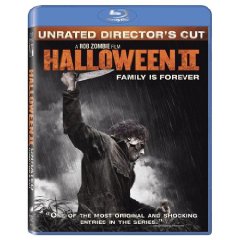 Rocker turned writer-director Rob Zombie returns to the horror field with this visually ambitious and aggressively brutal follow-up to his 2007 reinvention of John Carpenter’s seminal slasher Halloween. The 1981 sequel to the Carpenter film is completely ignored here (and for good reason) in favor of an extension of the central focus of Zombie’s Halloween, and all of his films, for that matter: the corruption at the heart of the nuclear family. Here, Laurie Strode (Scout Taylor Compton) is attempting to heal the psychic wounds from her previous encounter with brother Michael Myers (Tyler Mane) by bonding with Sheriff Brackett (Brad Dourif, a pleasure to watch as always) and his daughter Anne (Danielle Harris, herself a vet from the original run of Halloween sequels). Her previous surrogate father, Dr. Loomis (Malcolm McDowell) has forsaken his connection to Laurie by exploiting his connection to Michael with a tell-all book; meanwhile, Michael himself roams the lonely outskirts of Haddonfield, driven by visions of his mother (Sheri Moon Zombie) and a single-minded urge to bond with his sister at any cost.

Rob Zombie reported that this sequel to his Halloween remake is more of ‘his’ film then the original. Gone are the restraints of having to stick to the original character archs or overall story. This time he can do whatever he wants and 100 percent stamp the movie with this own sensibilities. Was that a good thing? Mostly yes and oddly enough, mostly no.

This sequel is a slight improvement over the original remake. It’s more stylish, shot on grainy 16 MM, it’s major characters have a bit more depth(not too much, this is a slasher movie after all). This Halloween does what the sequels series should’ve done, it changes the formula while delivering the same old goods. In Zombie’s first Halloween his approach was to get inside Michael Myers head and make him human, a rather rage-filled hulking human, but totally human. He continues that trend by letting us inside The Shape’s head. Though, and this is one of the film’s major highlights, towards the middle we’re not so sure whether we’re in Michael’s head or Laurie’s or both. Good idea and the imagery it delivers is quite surreal.

While there are things that I really liked about the sequel, there are a few things too that really made me shake my head. I think the scenes with the Sherri Moon Zombie and the white horse were symbolic and had meaning, yet did feel a bit out of place. I fully understood where Zombie was going with this, yet others were confused which hurt the story to a degree. Then add how awesome the first 15 minutes of this film is and you are thinking that Zombie is going to give us a re-imaging of the original classic, and then bam we are hit with a complete 180 degree turn. My last issue that I have with the film is that the new Dr. Loomis character with ego and all in tow just didn’t fit. It fit in Zombie’s world of Halloween, but not by the classic series.

It places me on the fence with this film where I can go either way as there are positives and negatives.
Movie Quality: 8.5/10

The print is presented in 1080p/AVC MPEG-4 with a 1.85:1 aspect ratio. Some will wonder why this film looks the way that it does, with all the grit and grain. ‘Halloween 2’ was shot with 16mm film stock, looking intentionally gritty. There are scenes where grain is rather light to heavy throughout never holding a consistent level. Colors are murky and muted with the color blue and red taking charge of the color palette. Black levels are strong and deep. My one beef though comes with the lack of details even though this is intentional. I have seen gritty films on Blu-ray that had some excellent details, yet details seem to be lacking here. I have to give Zombie credit here for sticking with his guns.
Video Quality: 9/10

The audio is presented in Dolby TrueHD 5.1 mix. ‘Halloween 2’ offers one aggressive sound mix that will blow you away and off your couch. This is a very aggressive mix with the soundfield being in use at all times. The surrounds get all kinds of action from sound effects, the soundtrack, action scenes, voices, and the score brings this film to life. Just hearing the blood splattering alone is creepy enough. Then add how clear Michael’s groaning and moaning as he stabs his victims. Dialogue is clean and crisp with no real issues. This mix is well balanced between the effects and dialogue.
Audio Quality: 9.5/10

I really enjoyed ‘Zombie’s Halloween’ albeit all the bad reviews that it received. I was very excited for ‘Halloween 2’ and the first 15-20 minutes had me in such suspense that I felt like I had not seen a horror movie in a long time where I felt tense and worried for Laurie. Some ideas strayed this film from really being great which is a shame. On Blu-ray the video is faithful to Rob Zombie’s direction and the audio is very aggressive offering a loud sound mix. I would recommend this as a rental first since some might be left disappointed.
Overall Rating: 8.5/10