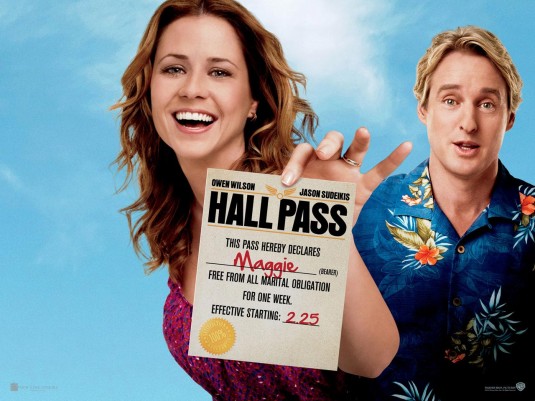 Anyone familiar with the work of writer-directors Bobby and Peter Farrelly, especially There’s Something About Mary, will be neither surprised nor shocked by the raunchy, gross-out gags that permeate Hall Pass. But what Farrelly fans might not expect is what comes at the other end of the spectrum–namely, a tender, even sentimental point of view in which marriage is sanctified and even a couple of delusional doofuses end up on the right side of righteousness. Buddies Rick (Owen Wilson) and Fred (Jason Sudeikis) have attractive, loving wives (Maggie and Grace, played by Jenna Fischer and Christina Applegate, respectively) and, in Rick’s case, a couple of cute kids. But boys will be boys, and after catching their husbands eyeing other women’s butts, making rude remarks in front of friends, and so on, the ladies decide to offer them “hall passes”–an entire week during which they can pretend they’re not married and do whatever they want, no questions asked, while the wives head for Cape Cod. 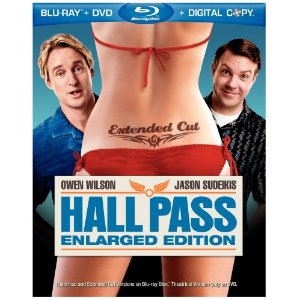 In that way it resonated sharply with me: the “roaring forties” are a difficult time when unwelcome facts of life (viz., the weighty hunch that best bits of it have been and gone) become harder to disregard. A popular gambit is denial: we believe we’ve still got the mojo, if only we were allowed to let it out. Hall Pass’s premise is a somewhat implausible calling of that particular bluff: alright boys: get it out of your system.

The cast is pretty decent. The chemistry between Owen Wilson and Jason Sudeikis is what’s front and center the entire film. Watching their confidence slowly crumble as they realize picking up women isn’t as easy as they remember is one of the key elements to the humor in the film. Christina Applegate is just as funny and is used just as much in Hall Pass that she was in Anchorman while The Office’s Jenna Fischer doesn’t seem to stray too far away from her Pam Beesly character. Steven Merchant’s Gary is used sparingly in the film, but he has some pretty hilarious scenes that steal the show more often than not. His extra scene during the credits of the film is easily one of the highlights. It has all of the outrageous antics that just transpired in the film and then some condensed into about two minutes. The sad part is Gary’s fantasy may have made a better movie. Richard Jenkins is probably the highlight of the cast though. He was such a straight shooter, businessman type in Step Brothers and assisted a vampire to feed in Let Me In. To see him go from characters like that to Coakley, a sex-hound who can get any woman he wants, is kind of incredible.

Some might find ‘Hall Pass’ a little disappointing. Its vulgar and outrageous humor will win over most who go to see it and, to be fair, it is funnier than expected. However, the film seems to try too hard to get laughs and insists on pushing the envelope far beyond its limits.
Movie Quality: 8/10

The print is presented in 1080p/AVC MPEG-4 with a 2:40:1 aspect ratio. ‘Hall Pass’ sports a very nice looking print on Blu-ray with only a minor hiccup. Colors are bright and vivid looking providing a colorful looking presentation. I never felt like there was a lack in the colors used in this print. Black levels are deep and inky. Flesh tones are accurate too a degree, but here is the minor hiccup I was talking about earlier. There appears to be an issue with the contrast at times as if it were turned up to max making everyone involved look like they spent months at the beach baking their skin. Details are spectacular showing off the quality of the print. There are no issues with this print in terms of aliasing or artifacts making this a squeaky clean print. Fans will not be disappointed to say the least.
Print Quality: 9/10

The audio is presented in a DTS-HD MA l0ssless 5.1 mix. ‘Hall Pass’ encompasses a very well done audio mix for a comedy. From the dialogue pieces and the effects in the soundfield, the audio is top notch. There are several times where the soundtrack fills the soundfield between music playing in the background to some of the scenes in the club. Dialogue was clean and clear through the center channel. I found this mix to be well balanced with no point during the film did I have to use my remote to adjust the volume.
Print Quality: 9/10

‘Hall Pass’ is an entertaining comedy that many will enjoy, but I can also see where it can turn off some. I was quite entertained throughout, yet there were a few moments where some of the extended scenes just did not fit into the film all too well. I recommend renting this before a purchase as some might end up regretting this purchase.
Overall Rating: 8/10