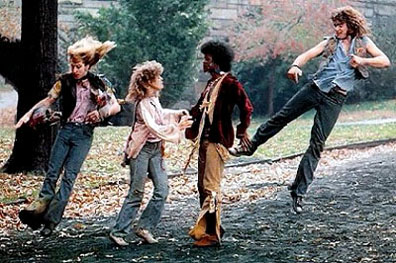 The Age of Aquarius is brought to life by the filmmaker who made Amadeus a household word. Milos Forman directed this version of James Rado, Gerome Ragni, and Galt MacDermot’s landmark musical in 1979 between his Oscar-winning films One Flew Over the Cuckoo’s Nest and Amadeus. With mixed reviews (Gene Siskel named it that year’s best film) and lukewarm box-office grosses, the film all but disappeared from the collective consciousness. Yet the film beautifully delivers on its promise to bring the ’60s back to life. Hair re-creates a colorful world of counterculture finding an anvil to pound on: the Vietnam War. Forman and his design team allow the film to wash over you, starting at the free-flowing opening in which masses of hippies, police, and even their horses eagerly groove to the familiar beat of “Aquarius.” In the best work of his career, Treat Williams makes his leading- man debut as Berger, the leader of the Central Park troop who takes draftee Claude (John Savage) under his wing on his trip through New York City and the apex of what the ’60s was. The new recording of the music is quite fine, with Chicago band member Don Dacus’s rendition of the title song a highlight. As Berger’s pièce de résistance number says, “I’ve Got Life”; so does the film, right down to its poignant declaration to “let the sunshine in.” 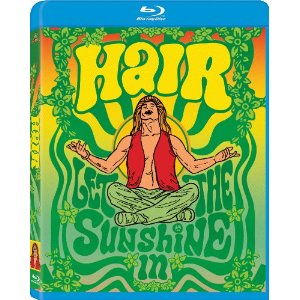 Hair is easily one of the most evocative movie musicals I’ve ever seen. The acting is terrific; the choreography is outstanding and the cinematography by Twyla Tharp works wonders for the film. The songs are incredibly catchy, too. The casting is exceptionally well done and overall this stuns me even if the two original authors James Rado and Gerome Ragni didn’t like Milos Forman’s adaptation of their stage play to the big screen. In addition, the quality of the print is very good.

When the action starts, we meet Claude Bukowski (John Savage) who has been drafted into the Vietnam War; he leaves his native Oklahoma to go to New York City for his physical exam and initial induction into the military. Once Claude gets to Manhattan, however, his plan for two days of sightseeing rapidly goes in another direction when he sees a beautiful young woman horseback riding in Central Park and meets a group of free thinking, loving hippies who hang out in Central Park. Despite Claude’s initial resistance, he soon takes a liking to the hippies (although Lord knows the hippies and Claude don’t seem to have that much in common) and the hippies like Claude, too. The hippie group includes George Berger (Treat Williams) who is essentially their leader, the colorful Jeannie (Annie Golden), “Hud” aka Lafayette (Dorsey Wright), Woof (Don Dacus) and, at times, a few others singing and dancing their way along for the ride.

To spice things up, there are all sorts of antics, like the hippies hiding Sheila’s clothing when she impulsively skinny dips in a Central Park lake with Claude; and there are the predictable yet very well done scenes of the hippies doing drugs and asking for a little “spare change” so they can rent a horse and show off a bit when they next encounter Sheila and her snooty horseback riding friends. Berger, the hippies and Claude even wind up crashing a party in Sheila’s honor so that Claude can see Sheila once more before he’s drafted.
Movie Quality: 9/10

The print is presented in 1080p/AVC MPEG-4 with a 1:85:1 aspect ratio. MGM has done a decent job bringing ‘Hair’ to Blu-ray.  The beginning of the film, especially the first 10 minutes or so are the most problematic with an image that hops all over the place. It just is an uneven mess at first which can scare someone off if their watching this for the first time. It is an issue with print damage involving white specs and dirt which are noticeable. The good thing is once you get past the first few minutes, all these problems do go away for the most part and rear their ugly head every so often. Colors are muted lacking any kind of pop. I found black levels to be deep and hold up very well. This leads to some nice details throughout, but there are also times where details falter later on during the film.
Print Quality: 7/10

The audio is presented in a DTS-HD Master Audio Mono mix. Dialogue comes through the center channel very clear and crisp. I was expecting this audio mix to have a bit more punch to it considering the content and this is an area that was disappointing. This is more of a front heavy experience with some dynamic elements panning throughout the soundfield. Bass lacks the punch needed to make this a better mix and I felt like it was hollow.
Print Quality: 7/10

Hair remains one of the best musicals ever–its current Broadway revival forty years after the original production proves this is both powerful and memorable. I highly recommend this movie for people interested in an era when young Americans had much less cynicism and so much more hope for the future than they do in our times.
Overall Rating: 6/10