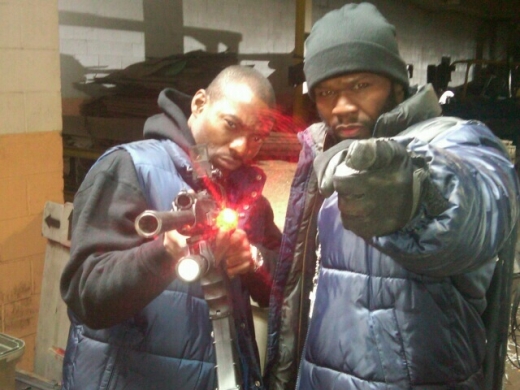 In the face of rising crime rates and gun violence, the Detroit Police launches a full-scale war against gun runners. With the cooperation of the Feds they target a criminal named Rich (Curtis “50 Cent” Jackson) and his arms operation. When a gun exchange goes bad and Rich’s old friend Angel (Val Kilmer), steps up big time and saves his life, they form a bond that makes his supplier and lover, Gabriella (AnnaLynne McCord) paranoid. But there is a snitch in the group and Gabriella’s biggest deal goes bad only to have an even bigger secret revealed, one that rocks Rich to his core. 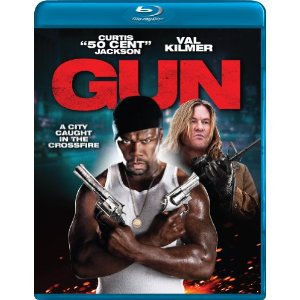 Moving forward we get to see Angel (Val Kilmer) released from prison. His story is yet unclear to us, but he moves into a room and soon finds his way to Rich. The two have a history where Angel once saved Rich from certain death. He asks Rich for a gun which he is more than happy to provide. A few days later he returns to take Rich up on an offer to join his crew.

As these two stories merge a third part of the puzzle appears in the persona of Detective Rogers (James Remar), a veteran cop on the force who has made his single most important goal to shut down the gun runners in his town. Saddled with a pair of hot shot ATF agents who seem more intent on ridiculing him than in helping, Rogers trudges along following the leads which eventually take him to Rich.

As the film moves along we discover that Rich has made a connection with a powerful organization that can supply him with more guns than he could ever imagine. His connection is a beautiful woman named Gabriella (AnnaLynee McCord) who seems as interested in bedding down Rich as she does in establishing him with her bosses.
Movie Content: 6/10

The print is presented in 1080p/MPEG-4 with a 2.35:1 aspect ratio. Colors are good and well saturated throughout the entire presentation. Blacks are strong. The image did appear soft in various spots. Flesh tones were also natural. The film carries a very clean look throughout which some might enjoy, while others might not be too happy with.
Video Quality: 7/10

The audio mix is presented in DTS HD 5.1 Master Audio lossless track. For a film that is centered around non stop action, I felt a bit underwhelmed by the audio mix. There really wasn’t anything that stood out, audio-wise the surround channels did not have that needed boost. If anything, the dialogue is crystal clear. I detected no hiss or any audio problems while watching the film. I just did not feel like the soundtrack was properly utilized here and that is a shame.
Audio Quality: 7/10

The script does not allow you to get close to any characeter so you really don’t care about any of there fates making the movie pointless. It had potential to be a good movie if they would have let the story develop and not rush into all the action. I am very sorry to say that this movie is not worth your valuable time and its just ok.
Overall Rating: 6/10