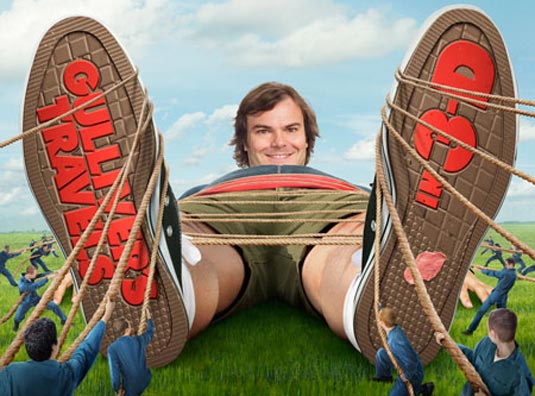 Gulliver’s Travels is about as marginal as the trailers suggest; it’s a tepidly entertaining, irreverent, and sometimes crass comedy starring Jack Black that takes some gigantic liberties with Jonathan Swift’s classic story about the land of Lilliput and its tiny inhabitants. Mailroom loser Lemuel Gulliver (Jack Black) is stuck in a dead-end job and living a dead-end life until the promotion of a fellow employee spurs him to speak up and take action. While a trip to the Bermuda Triangle may not be the date with crush Darcy Silverman (Amanda Peet) that Gulliver had envisioned, the voyage promises to take his career in a new direction, and it eventually delivers him to a kingdom known as Lilliput, which is populated by miniature people. After initially being captured and locked away in a dungeon, Gulliver wins the hearts of the Lilliputian people by saving their princess (Emily Blunt) from being kidnapped and rescuing their king (Billy Connolly) from a fire in a most unorthodox and unsavory way, and he quickly finds himself in a position of gigantic influence. Problem is, Gulliver is completely unprepared and unqualified for his new leadership roles, both on the personal and professional levels, and his ineptitude puts himself and all of Lilliput in extreme danger. Grade-school humor abounds in this fairly mindless film, something Jack Black always excels at, but viewers will find that the chuckles and the message about the power of believing in oneself fade equally as fast as the credits roll. 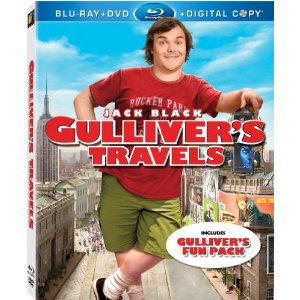 Gulliver is the manager of the mail room at a large newspaper. He has a huge, silent crush on the travel writing editor. He packs up all his boyish pride and charm and intends to ask her out, but he flakes and pretends to want to write a travel article. She gives him a fake one to test his skills and he plagiarizes some impressive write-ups. She offers him an obscure gig in the Bermuda Triangle. And there the story gets freaky. He’s sucked into a whirlpool and wakes up on a beach and discovers that he’s infested with little people — angry little people. He goes on to befriend them by saving the king but makes an enemy out of the head of the military, the king’s soon-to-be son-in-law. Drama, angst, and more drama follow, lessons are learned and everyone who deserves to lives happily ever after does.

The Lilliputians are extreme builders and there are very entertaining moments watching them in action. Live theater wherein the Lilliputians act out scenes from Gulliver’s “life” are entertaining too. “Live” interactive video games ala Rock Band or Guitar Hero are funny. One scene was an inappropriately laugh out loud moment for me. During the arrest scene on the beach, Gulliver’s shorts get yanked on exposing some crack, and then he falls, onto one of the most unfortunate Lilliputians. The credits may have been a bigger laugh though because he was billed as the butt crack guy. My friends and I thought that would be a fabulous addition to his resume and/or a great ice breaker at parties. “So have I seen you in anything?” “Well, my best part was Butt Crack Guy in Gulliver’s Travels.”

Lots of bathroom humor. From saving the king by putting out the fire via bladder contents, to the scene where the words Lame A–are used about ten times while Gulliver tries to convince the General that Lame A–is the ultimate in compliments, to the whispered say-what-I-say-to-your-lady-love scene, to the anti-war dance, there are plenty of flat or odd moments. Gulliver’s relationship with Darcy (Amanda Peet) is not real fleshed out or believable, and Emily Blunt really doesn’t get much of a chance to shine.

The print is presented in 1080p/AVC MPEG-4 with a 2:35:1 aspect ratio. Colors are deep and well saturated throughout the entire presentation. Blacks are strong and almost inky at times. Nowhere did the image ever appear soft with such strong colors and black levels. Flesh tones were also natural. The film carries a very clean look throughout which some might enjoy, while others might not be too happy with.
Print Quality: 9/10

The audio is presented in a DTS-HD MA lossless 5.1 mix. This is a very immersive soundtrack during the action sequences. This is a film where there are a lot of effects and thrilling sequences. Those looking for an audio mix that will take advantage of your equipment, this is the film for you. This is a very well done audio presentation that has dynamic range with the sound effects and a lot of panning from speaker to speaker. Dialogue is clean and crisp through the center channel.
Print Quality: 9/10

All in all, a really awful cinematic experience. Extremely forgettable. This film should be analysed in film classes or even in movie executive conference rooms as to how not to make a film.
Overall Rating: 7/10