Posted in Videogame Reviews by George Theofanopoulos on 27 October 2008 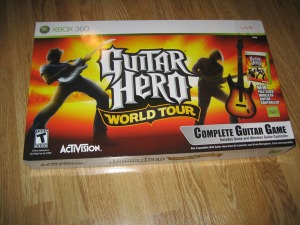 I finally opened up the new Guitar Hero World Tour Guitar Kit this evening after having the original box from Gamestop starring at me most of yesterday evening. I was able to go to Walmart with a gift card and grab the Guitar Kit for cheaper, so tomorrow I can just return the one I had purchased from Gamestop.

I find the new guitar to carry more weight than the Les Paul and any other previous Guitar Hero guitars. It is a bit larger in size and the whammy bar is now longer to match an actual guitar and the Rock Band 2 guitar. The neck still snaps into the bottom portion of the guitar, except this time it sits in there tight with no room to move around. The issues with the Les Paul having a bit of breathing room to slide up and down on the neck causing the connections not to touch are gone.

The fret buttons feel much better than before and no click noises from them at all. They registered very well after playing about 15 songs total so far in Guitar Hero World Tour. The strum bar is probably the most annoying piece of the guitar because it is just too clicky. Rock Band 2’s fender is great for the strum bar, it is soft and quiet. After playing for a bit, you learn to tune it out.

My biggest beef has to go with the ridiculous touch sensitive piece of the guitar. While the concept is great, the execution is horrible. Trying to use your fingers in the middle of a song to go from the frets to the touch sensitive part to string along some notes just doesn’t work. What was Activision and Neversoft + RedOctane thinking is beyond me.

I highly recommend the new guitar based off of 15 songs and so far I really like the extra weight and feel. RedOctane is almost there with creating the perfect game guitar, they just need to figure out how the touch sensitive is going to be incorporated much better in game.