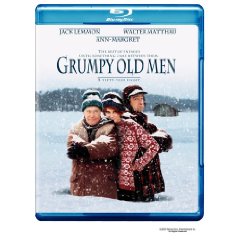 Jack Lemmon and Walter Matthau are reunited in this popular 1993 comedy, in which the Odd Couple veterans play John and Max (respectively), a pair of elderly bachelors whose lifelong friendship is based on mutual aggravation and constant bickering. Their competitive natures kick into overdrive when the beautiful Ariel (Ann-Margret) moves into their otherwise snowbound Minnesota neighborhood. She takes a liking to John, but after a lover’s spat she also gives Max a chance at romance, and the long-time buddies reach a peak of grumpy rivalry. It’s a stretch to think that Ann-Margret’s dating choices would be limited to a pair of grouchy codgers, but sarcastic attitude and snappy dialogue made this a surprise hit (followed by a 1995 sequel), and Burgess Meredith adds plenty of spice as Lemmon’s amorous old father. Don’t forget to watch the hilarious outtakes during the closing credits!

One of the most superb comedies ever filmed, Grumpy Old Men showcases the multidimensional talents of two of Hollywood’s most accomplished actors, Jack Lemmon and Walter Matthau. With the additional brilliant comic performance of Burgess Meredith, Grumpy Old Men transforms from a gem of a picture into one of the funniest movies ever made. A sweeping commercial success, the film spawned the sequel Grumpier Old Men – a rare breed of movie that almost lived up to the quality of the original.

In this movie, Lemmon and Matthau play the roles of John and Max, respectively. John and Max have been next-door neighbors their whole lives, and though they have an extremely hostile love/hate relationship, they remain each other’s best friend. Their hostility stems from decades before when John wound up marrying the girl they both loved. Both are now widowers who live alone in their separate houses, and a woman named Ariel (Ann-Margret) moves into the house across the street. Both men are immediately smitten by Ariel, and it leads to a rehashing of the same hostile feelings they once held for each other in their youth.

While the plot may seem like heavy material, it really isn’t. The story is presented in a extremely touching yet light-hearted way. Both John and Max are extremely loveable, and the audience is made to feel sorry for them because both are lonely in their old age. The only flaw in this movie is in the plausability of Ariel actually having romantic feelings for either of these two men. She’s a relatively young woman and energetic woman, and the fact that she has these two old men fighting for her attention doesn’t seem quite believable.
Movie Content: 10/10

The print is presented in 1080p/VC-1 with a 1.77:1 aspect ratio. I was truly amazed at how great this film looks on Blu-ray considering that the previous DVD release was not even in anamorphic widescreen. The color palette is strong with colors holding up well for a 16 year old film. Black levels are also strong. I found the print to be sharp with some excellent details. There is some light grain throughout the entire print and never becomes intrusive.
Video Quality: 9/10

The audio is presented in Dolby TrueHD 2.0 mix. I was a bit surprised that the audio mix did not come as a Dolby TrueHD 5.1 mix considering that this film is from the early 90’s. The 2.0 mix will do just fine with this film presentation as this is more of a dialogue driven film. The dialogue comes through the center channel clean without any issues.
Audio Quality: 8/10

‘Grumpy Old Men’ has to be one of my favorite all-time comedies that is smart and quirky. On Blu-ray this film offers excellent video that can contend with some newer released films on Blu-ray in the video department. I highly recommend this film on Blu-ray to fans and even those that are remotely interested.
Overall Rating: 9/10