Posted in DVD Reviews by George Theofanopoulos on 13 August 2009 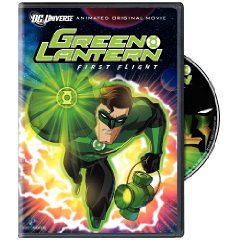 Green Lantern: First Flight is an animated and lively origin story about the transformation of test pilot Hal Jordan into a member of an intergalactic society watching over the universe. Flying an experimental jet one day, Jordan (voiced by Law and Order: Special Victims Unit’s Christopher Meloni) encounters a dying alien who is a Green Lantern protector of Earth’s sector of the cosmos. The alien’s ring, a repository of enormous power granted by a council of elders called the Guardians, zips onto Jordan’s finger, but neither the Guardians nor other Green Lanterns are ready to accept him as an unproven member. Complicating things for Jordan is the fact that the Green Lantern tasked with mentoring him, Sinestro (Victor Garber), is plotting the destruction of the Guardians with the acquisition of “yellow power,” the only force that makes the Lanterns’ green power useless.

Jordan’s resilience and willingness to throw himself in harm’s way for the good of everyone gain respect, but his inevitable showdown with Sinestro is an epic fight. This PG-13 feature is a bit bloody, and there are a few swear words, but most of the violence arises from that familiar, shape-shifting light emanating from Jordan’s ring. Happily, there is some of the old DC Comics wit in the way his Green Lantern ring shapes its beam into such imaginative weapons as a golf club and a flyswatter.

Being able to watch an entire animated film about The Green Lantern is unbelieveable. The success of the DC animated films is directly attributed to their quality production. Every aspect of the film is nearly perfect including the voice acting, the lush animation, and the packaging.

This was a really good, exciting movie. Sinestro made a great villain because in his mind he was actually the hero. Sinestro thought he was the only one willing to do what needed to be done to bring order to the universe, and that becomes the major conflict in the story because the rest of the Corp thinks he’s willing to go too far. The voices for the characters are well matched and the action is great, with a few unexpected plot twists and surprises.
Overall Rating: 9.5/10

This movie is a great original story for Green Lantern fans. It’s got Hal Jordan, Sinestro and the Green Lantern history everything a Green Lantern fan craves in an original ‘Training Day’ like story. The video and audio presentation is very good on DVD which will make fans very happy. This is highly recommended if you are a fan of Green Lantern.
Overall Rating: 9/10