Posted in DVD Reviews by George Theofanopoulos on 29 December 2008 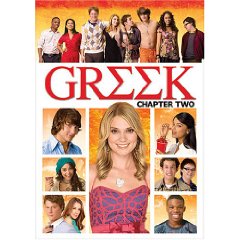 The power of nighttime soap drama shows is incredible.  It was Desperate Housewives which convinced television networks to begin spending money on scripted shows again after the juggernaut which was Survivor.  It was Dawson’s Creek that made the WB into such a power.  It was the continued power of One Tree Hill and the new power of Gossip Girl which have kept the CW afloat for so long.  Now one of the nighttime teen soap dramas which is changing the face of ABC Family is available on DVD.

Starting this December 30th, now available in a three disc boxed set from ABC Studios comes the next season of everyone’s favorite show about life at Cyprus-Rhodes University.  Greek – Chapter Two is ready to blast into your living room and keg-stand its way right into your heart.  Bring home this hilarious and touching television show today!

This show takes place among fraternity members and their friends at the fictional Cyprus-Rhodes University.  Rusty is in the second half of his senior year and loving his frat run by Cappie.  Casey, his sister, and Rebecca are members of the most prestigious sorority, even though Casey just broke up with her also prestigious boyfriend.  There are romances and friendships growing and being destroyed, a whole bunch of gossip and a whole bunch more fun.  Will this semester turn out to be better than the last?
Movie Content: 4/5 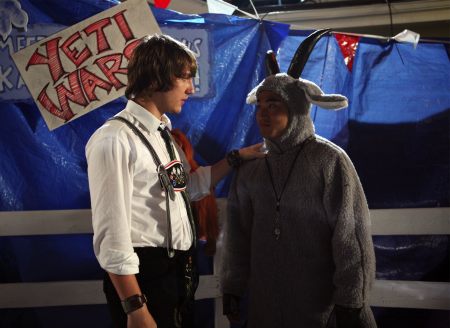 The print is presented in anamorphic widescreen 1.85:1 aspect ratio. Colors are vibrant and natural, providing for a bright colored image.  There is some slight grain in this print, but not anything that becomes intrusive. The print is almost clean from artifacts and compression.
Video Quality: 4/5

The audio is presented in Dolby Digital 5.1 mix. This is a dialogue driven show your rear channels won’t get much of a workout. Dialogue is clear throughout the presentation never having to raise the volume.
Audio Quality: 4/5

I thought the first season of this show was completely fantastic and I was still blown away by just how good the second season was.  Rusty has got to be one of the greatest characters on television right now, no doubts about it.  Cappie is still as magnificent as can be and this show continues to deliver that winning combination of hilarity and heart-touching moments.  ABC Family Channel is certainly a power to be reckoned with when it comes to nabbing the teen demographic and will continue to be so based off of the strength of some of their new offerings.  This show offers a wholesome yet realistic view of college life and family bonds and I recommend it without reservation.
Overall Rating: 4/5 (Purchase)

« BeyondMediaOnline is Back Online!
‘Days of Thunder’ Blu-ray Review »